Wow. What a long, strange trip it’s been this season, huh?

It first appeared that fortune had smiled upon the Vikings with the 17 inches of snow dropped on our collective heads causing the New York Giants to divert their flight to Kansas City, disrupting their travel plans and their routine.

The delay of the game from yesterday to today offered quarterback Brett Favre an additional day to heal and Percy Harvin additional time for his migraine headaches to pass.

But fate has proven to be a cruel mistress, robbing the Vikings of their home field advantage for at least one game (possibly more).

The Vikings travel to Detroit where they may have a hostile crowd despite being the “home” team, with Detroit fans who may feel like rooting against a division opponent and lingering Packers fans who may want to take out their frustration over their team’s loss to the Lions on the visiting Vikings.

The only pluses at this point is that both the Bears and the Packers lost and the Giants have had a little bit less preparation than the Vikings as a result of the travel disruptions.

These are some of the things I’ll be watching:

JARED ALLEN
Jared Allen will line up against David Diehl, who will start in place of the injured Shawn Andrews. Diehl hasn’t played since Week 9 against the Seattle Seahawks and yet he’s still allowed 6.5 sacks this year, after allowing 5.5 all of last year. He has trouble with speed rushers like Allen.

THE WILLIAMS WALL
Kevin Williams and/or Pat Williams will face off against Rich Seuburt, a guard who has been forced to slide to center due to a foot injury to center Shaun O’Hara.

It’s no accident that the Vikings resurgent pressure by their front four has coincided with the ability of the Kevin Williams to create havoc up the middle. Whether it’s against the run or the pass, disrupting the play with penetration from the defensive tackle positions will be an important element for the Vikings to succeed.

Get pressure on Eli Manning and then be prepared to catch the interceptions.

SECONDARY
If the Giants offensive line affords Manning time in the pocket, second-year cornerback Asher Allen will continue to get tested today. I’m not so much worried about Allen as I am about Madieu Williams.

If I’m the Giants offensive coordinator, I’m going to design some calls that force Williams to make a play…or not. Because it’s more likely he won’t make a play than he will.

If Manning has time, the secondary will be put to the test because the Giants are likely to be back at full strength in the passing game with returning receivers Hakeem Nicks and Steve Smith joining Mario Manningham.

DEFENSIVE GAME PLAN
The defensive game plan, then, should be clear: Shut down the run (easier said than done against this crew, but the Vikings have traditionally had some success in that area), get pressure on Eli Manning and force him to win the game for them, becaaaaaaause…

PICKS
Eli Manning has thrown ten interceptions against the Vikings, four of which have been returned for touchdowns. He’s thrown seventeen interceptions this year, second only to Brett Favre himself for the league lead.

0
That’s a big fat zero. That’s also the number of times Eli Manning has beat the Vikings in his career. Out of four tries, he’s won zilch.

I think he’s probably hyperventilating about now. I think we’re in his head.

TO FAVRE OR NOT TO FAVRE
That is the question.

We’ll know soon enough whether or not Brett Favre will extend his consecutive starting streak to 298 games and, more importantly, if he can be effective in doing so.

Yes, Favre has apparently texted reporters saying he couldn’tve started on Sunday and that he doubts he’ll play Monday but seriously, I’ll believe it when I see it. This feels like just more of Favre’s unique ability to create melodrama.

RUN EARLY & OFTEN
I expect, though, regardless of who plays quarterback, the Vikings to run the ball a lot tonight.

I think the Vikings will want to limit either 1) the opportunities for Favre to get pummeled or 2) limit the mistakes Tarvaris Jackson might make throwing the ball, so they’ll stick with the run game as much as they can.

With the offensive line in the shape it is in, it’s probably the Vikings best bet. But it will be a very tough test, given that the Giants are seventh in the league against the run. That makes this a mano-a-mano contest.

It will be interesting to see which side of the line they favor; the right side with Ryan Cook at guard or the left side with rookie Chris DeGeare (assuming Hutchinson doesn’t play) at guard?

It will also be interesting to see what the mix will be as far as who carries the rock is concerned.

Obviously, Adrian Peterson will get most of the carries but how many touches will Toby Gerhart get? Will Darrell Bevell have many two back sets in store for the Giants?

If Percy Harvin is active, how much are we going to see him in the backfield? Will Joe Webb be worked into the running game, either out of the backfield in a wildcat formation or on end arounds?

Finally, what can we expect to see from newly-acquired Lorenzo Booker?

I actually think this will be a close game with the Vikings having a decent chance at pulling this one out. The team has looked inspired during Frazier’s short tenure and, given the losses to suffered by their Central Division foes this Sunday, their prospects are a teeny bit brighter.

THE DEETS
The Vikings “host” the New York Giants at Ford Field in Detroit today. Kickoff is at 6:20 CST and the game will be broadcast on Fox TV regionally and locally.

Your play-by-play guy will be Joe Buck and Tory Aikman will be your analyst with Pam Oliver serving as the sideline “reporter.”

The NFL Network will re-air the broadcast Monday night at 11 CST. 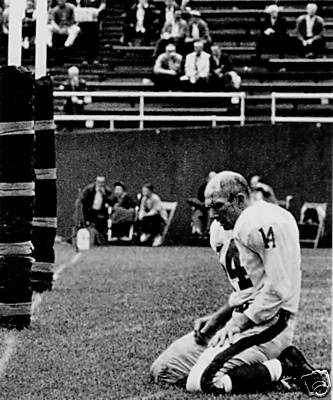 For the second time in a week I’ve found myself having to stop and say huh while reading one of ESPN.com’s NFC North blogger Kevin Seifert‘s posts.

The most recent episode was while reading his wrap of the Lions’ victory over the Packers. The first sentence of the penultimate paragraph reads: “The Packers’ final play: I wasn’t offended by Flynn’s decision to target Jennings deep down the left sideline on fourth-and-1.”

Offended. What a curious choice of words.

I can’t recall ever being offended by a play call. Angry, annoyed, perplexed, dumbfounded, yes; but offended? I guess my sense of moral outrage does not extend to the play book.

The other time Seifert’s writing gave me pause was when reading a piece cautioning that Brett Favre risks becoming a latter day Y.A. Title. The 60s-era New York Giants quarterback was the subject of an iconic photo capturing him on his knees, bloodied and defeated, symbolizing the example of the player who stayed beyond his capacity to play the game.

Seifert said about the photo: “The photograph became a paradigm for the unceremonious end to a Hall of Fame career. ”

When I do use the word “paradigm,” I use it to refer to a philosophic or scientific framework. While his use of “paradigm” here is not incorrect, it’s a little awkward, for me anyway.

Don’t get me wrong. I think Seifert is generally a very good and insightful football writer and that’s probably why these puzzlers stick out so much.

Forgive me; I’m an English Major.

TWO GREAT PIECES
Conversely, the following two pieces made me say huh in the positive, I Learned Something sense. Very good stuff:

AMAZING
I’m sure you’ve seen it by now but even if you have, the Fox 9 video footage from inside the Metrodome of the ceiling collapsing and spilling snow onto Mall of America Field is so mesmerizing it’s multiple-replay worthy. What makes the footage so compelling is the roaring sound of the roof coming down. [WATCH the Metrodome Roof Collapse Video.]