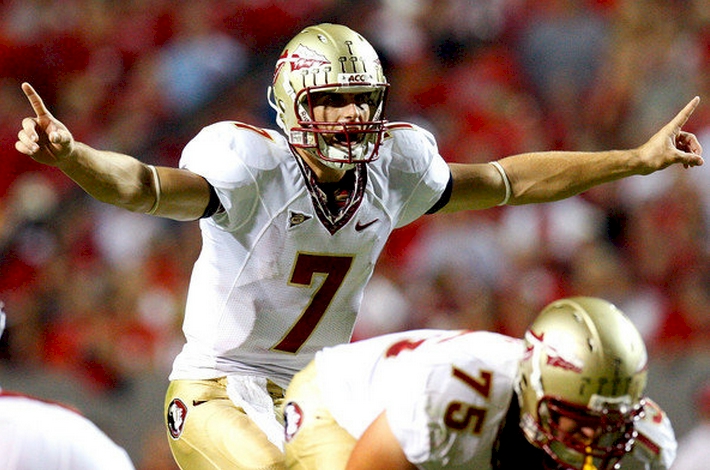 Christian Ponder At Florida State, Away

CAN CHRISTIAN PONDER SUCCEED FROM DAY ONE?
[ad#300x250inpost]

The more I read about Christian Ponder, the more I watch his highlights, and the more I think about his situation with the Vikings, the more confident I feel about his ability to succeed as the Vikings quarterback.

While Frazier has indicated there will be open competition for the starting quarterback position once training camp starts, the presumption is that the job is Ponder’s to lose.

Will he tear up the league like Randy Moss did his very first game? Not likely; very few quarterbacks do. But considering the environment he finds himself in, he’s got superb chances of obtaining quick success as a Viking.

The one thing you read over and again in the post-draft analysis of the pick is that Ponder is probably the most NFL-ready of the quarterbacks drafted this year. He ran a pro-style offense at Florida that featured many concepts that are very similar to the West Coast offense the Vikings will run.

You look at the tape and you can see he’s very good at the short and intermediate timing routes and that he can read defenses. He’s extremely accurate. And he’s very mobile and quick on his feet, so he gives us the added dimension of being a threat to tuck and run.

What you don’t see is a lot of snaps under center nor any long bombs. But, again, that’s not a crucial trait in a West Coast quarterback.

He’s got a coaching staff that obviously believes in him enough to take him at number 12, when everyone is saying he was a reach there. (Though, Sirius NFL Radio host and former NFL quarterback Jim Miller has said that the Bills were planning on trading up to grab Ponder.) Indeed, Leslie Frazier chose his offensive staff in part on the strength of their ability to groom a young quarterback.

Lastly, look at the talent around him. He won’t be asked to carry the franchise on his shoulders.

He’s got the best running back in the league to hand the ball to in Adrian Peterson and a pretty good change-of-pace guy in Toby Gerhart. I also expect we’ll have a return to the level of play we expect from a third down back this year with Lorenzo Booker.

You’ve also got Percy Harvin as an option out of the backfield but, of course, he’ll be Ponder’s primary slot receiver. I’m guessing that with a brand spanking new franchise quarterback, Ziggy Wilf will want to secure the services of Sidney Rice long-term, so Rice becomes another receiving threat for Ponder to throw to.

At tight end, we’ve suddenly got an embarrassment of riches with the second-round pick of the top tight end in this year’s draft, Kyle Rudolph. Pair the fast, big, sure-handed Rudolph with Shankopotomous and Ponder will be able to take advantage of some mis-matches while also adding a huge red zone target to the mix. With this pair of receiving tight ends at his disposal, the Vikings now have the luxury of putting Jimmy Kleinsasser at H-Back of fullback where you could use his blocking ability in short yardage situations.

But that leaves us with the offensive line.

Can Anthony Herrera return to form after injury? Will Steve Hutchinson bounce back after a subpar performance last year? Can John Sullivan stay healthy for a whole year? Can he match up against the Detroit Lions newly scary interior line? Will Phil Loadholt improve against speed rushers? Will Bryant McKinnie improve? Period?

The thing is, if we get the same level of play from the offensive line this year that we did last, the rest of the offensive talent on squad will do Ponder no good at all.