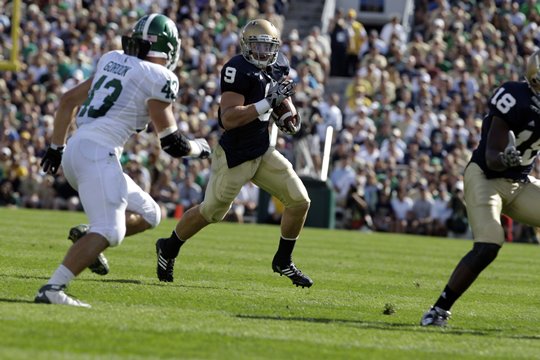 The Vikings took the best tight end in the draft with their second pick (11th pick of the second round, 43rd overall) in Kyle Rudolph of Notre Dame.

Rudolph stands six feet six inches tall and weighs 259 pounds and sporting that frame, he runs a 4.64 forty-yard dash. That combination of size and speed has got to have Leslie Frazier and Bill Musgrave salivating at the possibilities.

Judging from Kyle Rudolph’s highlights, he looks to have a good feel for finding the soft spot in zone coverage as well as the ability to separate when playing against man coverage.

He runs great routes, has very soft hands, and catches the ball with his hands and away from his body rather than using his body to basket catch. He’s got great body control and excellent field awareness; he’s superb at using his blockers and very cognizant of where he is on the field, tapping his toes when he catches the ball near the sidelines or in the back of the end zone.

After he catches the ball, he can make a move or two in the open field to make defenders miss but will also break tackles and will likely require more than one guy to bring him down. He instinctively covers the ball in traffic.

Rudolph does not appear to be too comfortable tracking the ball over his shoulder and seems to turn his body toward the ball on passes where he’d be better served catching the ball in stride. While most of his routes are likely to be slants, crosses and down the seam; with his ability to line up wide and his speed, it’d be nice for him to shore up that aspect of his game.

He’s a decent blocker but he’ll probably have to build up his lower body strength and take lessons from Jimmy Kleinsasser if he’s going to be able to sustain drive blocks.

It should be fun to watch the Vikings passing game when they have double tight end sets with both Rudolph and Visanthe Shiancoe on the field, because they’ll definitely be able to take advantage of mismatches against linebackers, with both players’ ability to stretch the field.

The real excitement, though, should come in the red zone, especially from a power running package. The Vikings will create real problems for teams trying to defend them from three or fewer yards out. Put both Rudolph and Shank in a double tight-end set, line up Kleinsasser as fullback to lead block for Adrian Peterson and you’ve got the blocking power to just push the ball in the end zone but you’ve also got the option to slip Shiancoe or Rudolph out in the flat on a play-action pass.

If you put Percy Harvin on the field, you’ve got the option to fake a plunge by Peterson and give it to Percy on an end-around.

If you’ve got Sidney Rice on the field, you can show a smash-mouth run set and get a nice mismatch against a corner for a jump ball or a fade. And, with his six foot six frame and his 33 inch vertical leap and soft hands, you can do the same with Rudolph.

It should be good.