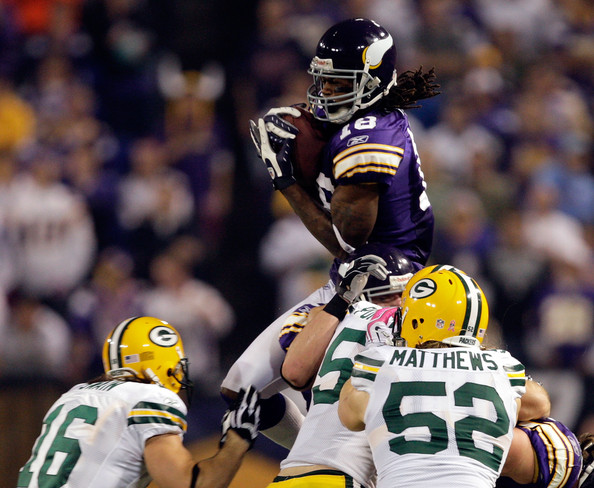 Hello. It’s been a long time.

It’s good to see you again because now, with The Recent Unpleasantness behind us, we can resume discussing our favorite subject: Football generally, and Minnesota Vikings football, specifically.

The Pioneer Press‘ Jeremy Fowler has this week’s schedule:

Thursday, the Vikings can cut players as the waiver period begins at 3:01 PM.

Friday, marks the beginning of the signing period of free agency at 5 PM.

Folwer also has a nice run-down of how the Vikings will get under the salary cap: 1) See what they’ve got for a roster, who’s injured, who can compete, etc., 2) Cut to make room (Madieu Williams [thank gawd], Bernard Berrian [possibly], 3) Restructure existing contracts (Adrian Peterson & Chad Greenway to long-term deals, and 4) Pursue free agents (Sidney Rice and Ryan Longwell and possibly a veteran quarterback).

The StarTrib’s Judd Zulgad lists the Vikings free agents and here’s my list of how the Vikes should treat them.

PURSUE: Sidney Rice. I think the Vikings will do a full-court press to sign Rice but I think Rice is determined to sign with the highest bidder and that won’t be the Vikings. If the Vikings manage to sign him, here’s hoping he’ll stay healthy and turn into the consistent superstar we all believe he can be. But if Rice leaves as I suspect he will…well, he screwed with us enough last year that I won’t shed a tear.

Ben Leber. Leber will likely attract interest elsewhere and might even price himself out of the Vikings budget, but if it makes financial sense to bring him back, I say do so. With Chad Greenway and E.J. Henderson, this has been the best and most consistent linebacking corps the Vikings have fielded in recent memory.

Pat Williams. It sure sounded as if Williams would not return for any reason but he appears to have softened his stance of late. If the price is right and we use him solely as a run-stopper, why not bring him back. Sounds like the big guy just needs to be shown a little love.

SIT TIGHT: Ray Edwards. Edwards, too, sounded for all the world there was no way in Hell he’d play in Purple again but in a recent interview, he left that door open. Let’s see what the market is for Ray Edwards.

I suspect that he’s going to get a big payday and I also suspect that whoever gives him that contract will end up regretting it because he disappears so frequently. But still, he’s racked up eight sacks in each of the past two season and that’s not to be overlooked and he does tend to save his best for the playoffs.

I’m just saying if he comes back, he should come back on the Vikings terms, not his.

RE-SIGN, FER GAWDSAKES! Ryan Longwell. Don’t go pulling a Tice and mess with the kicking game when you have one of the most consistent placekickers in the league already on your roster. Add to that the rule-changes that will make Longwell more effective on kickoffs, and he’s well worth a new contract.

There’s plenty of free agent talent out there, folks, for the Vikings to improve their roster. I expect the Vikings will maintain their philosophy of getting young players on the rise with the possible exception of a veteran quarterback. ESPN’s Kevin Seifert has an unofficial list of unrestricted free agents.