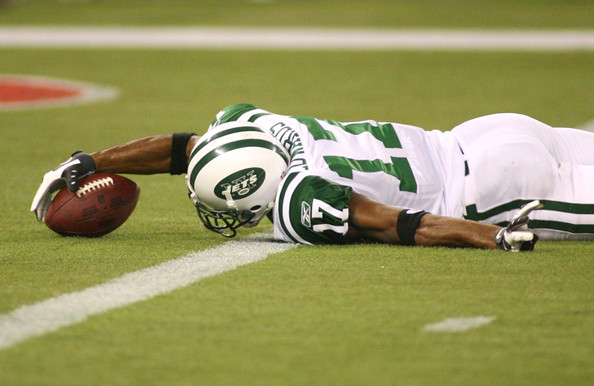 Will the Vikings go after Braylon Edwards?

While you’re waiting for new Vikings quarterback Donovan McNabb to make his appearance in town, I’ve assembled some career highlights at the site for your viewing pleasure. In addition to highlights spanning his time in Philadelphia, there is also a piece highlighting the 1999 Eagles, his rookie year; Super Bowl XXXIX highlights against the New England Patriots; and Donovan In His Own Words; a 2004 Vikings vs. Eagles game pitting two Vikings quarterbacks who were drafted in 1999; and video of his dismal last season with Washington. [WATCH DONOVAN McNABB HIGHLIGHTS.]

With Sidney Rice going to Seattle, the Vikings turned their attention to replacing him by reportedly negotiating with Green Bay Packers wide receiver James Jones. The 27-year-old Jones made 50 receptions last year, his fifth season, for 679 yards and five touchdowns.

Jones is shorter than you’d like at the position, standing 6′ 1″ and weighing 208 lbs, but he’s said to be a deep-threat talent.

The Vikings other options include San Diego Chargers receiver Malcolm Floyd and Braylon Edwards of the New York Jets.

Edwards would come with off-field baggage that includes a nightclub fight and a DUI. The fact that third overall player selected in the 2005 draft is still on the market says a lot.

He’s got the stuff of a number one wideout. His best season was 2007 with the Browns when he had 80 receptions for 1,289 yards and sixteen touchdowns in 16 games as a starter. Last season, he started 15 games for the Jets and had 53 catches for 904 yards and 7 touchdowns.

Speaking of receivers with baggage: Plaxico Burress, Terrell Owens, and Randy Moss are still on the market.

If the name is not familiar to you, you’ll remember him as the guy who went high on the high/low illegal hit on Brett Favre during the 2009 NFC Championship game. Yeah, him.

Remi Ayodele stands 6′ 2″ (6’5″, if you count the spiked do) and weighs in at 318 lbs, so he’s got the body of a nose tackle but is likely to be a two-down player, as he’s said to have no pass rush ability whatsoever.

He had 37 tackles, 16 assists, one sack and one forced fumble during 16 games as a starter for the Saints last year. New Orleans signed Shaun Rodgers, making Ayodele expendable. [WATCH REMI AYODELE HIGHLIGHTS.]

There’s still a possibility that Pat Williams will re-sign with the Vikings.

The Vikings finally released safety Madieu Williams and cleared $5.5 million in cap space. It really makes me feel like a jerk for criticizing such a super good guy, but Oh…My…Gawd…was he a bad safety.

The Vikes apparently sniffed around at San Diego safety Eric Weddle, who ended up re-signing with the Chargers for a monster five-year contract worth $40 million, $19 million of it guaranteed.

Raider Nnamdi Asomugha, the top safety on the market, is still out there but with the market set by the Weddel deal, there’s really no way the Vikings will be in that hunt.

I have a feeling our starting safety combo this year will be Tyrell Johnson and Husain Abdullah, who plans to re-sign with the team. Safety Eric Frampton has agreed to terms with the Vikings as well.

What’s up with Ray Edwards gettin’ no free agency love?

I figured he’d have gotten his cold, hard cash by now.

Make your voice heard at the Facebook page: [VOTE.]

The Vikings can begin signing free agents at 5 PM today, so tune in to your radio on the way home from work today.

This coming Wednesday, August 3, I will compete in a sports trivia contest with three other Minnesota sports bloggers at Gabes By The Park in Saint Paul at 6 PM. I’m pretty horrible at trivia, so if you want to have fun and see me make a fool of myself, JOIN US!

It will be a fun night of sports trivia. Play along as four popular bloggers share their passion for sports at a live sports trivia show. One of the four contestants will win a 4G Thunderbolt™ by HTC. Co-sponsor Gabes by the Park will give away audience prizes too.

In addition to yours truly, the other bloggers will be Nathan Eide, Managing Editor of Hockey Wilderness, Tim Allen of the Canishoopus Blog, and Nick Nelson of Nick’s Twins Blog. Albert Maruggi will host.

There will be food specials from The Original Gabes by the Park for those that check in and use hashtag #vzw4g. You can also check out the latest 4G devices from Verizon including tablets and MiFis .