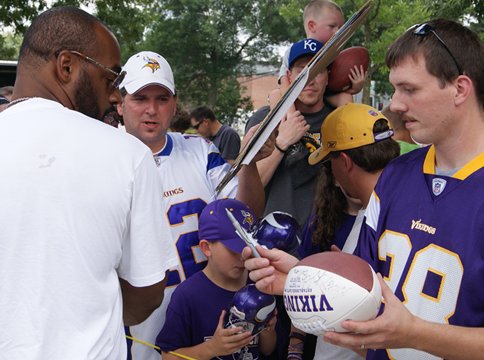 The Vikings have all their rookies signed, have netted 16 undrafted free agents, signed Atlanta receiver Michael Jenkins, are in talks with Chad Greenway but, oddly, not Adrian Peterson, over the terms of a long-term contract and will play their first pre-season game 12 days from now.

It is now clear that Donovan McNabb was brought in to be your Vikings starting quarterback this year, not as a bridge to get Christian Ponder through the first quarter of the season. McNabb will play and, barring injury, Christian Ponder and Joe Webb will sit.

If this is the direction we’re going, then in theory I like it. Setting aside my skepticism that McNabb still has game, let’s assume he does and last year was an aberration. A veteran quarterback who still has the skills gives us our best chance to win and removes the notion that this will be a rebuilding year, an idea, I should point out, that Leslie Frazier has been promoting all along.

The fact that the Vikes first went after Tyler Thigpen, however, would seem to indicate the Vikings initial plan was to get a bridge quarterback and that getting a veteran as unquestioned starter was their backup plan. Thigpen, though underrated, is no one’s idea of a franchise quarterback.

It also happens to be the textbook method by which you’re supposed to groom a young quarterback. Put him on the bench and let him learn from a veteran quarterback from there. You can wreck a young quarterback by throwing him to the wolves too soon, so, as anxious as I am to get to the future, I am happy to see the plan is not to start Ponder from Day One.

Offensive coordinator Bill Musgrave did say that they intended to keep Joe Webb at quarterback but left the door open for his conversion to receiver. If Webb does remain at quarterback, Musgrave did not rule out that we wouldn’t see him on the field in another capacity.

I hope that’s true. I like the idea of our third-string quarterback being a situational receiver or kick returner, as well. I also think Webb has the skills to develop into an NFL starting quarterback. He’ll benefit from having McNabb on the team as much as Ponder will and, if Musgrave is all that as far as quarterback development is concerned, it’d be nice to have that trade bait reserve quarterback we can use to steal from another team…say, someone like, oh, the Arizona Cardinals.

I wasn’t high on Kevin Kolb during the offseason because there was just not much to go on. He’s started what? Seven games in spot duty? During the past four years he’s thrown 319 passes for 2,082 yards, 11 touchdowns and 14 interceptions for a QB rating of 73.2.

Yet that thin resume was enough to cause the quarterback-desperate Cardinals to send a second-round draft pick and cornerback Dominique Rodgers-Cromartie to the Eagles for the pleasure of paying Kolb a reported $63 million dollars. Sucks to be you, dudes.

Tarvaris Jackson has a better quarterback rating than Kolb.

Keep this in the back of your mind: If Kolb turns out to be what he appears to be, a pedestrian quarterback who was put in situations that made him look good by an Eagles team that knows what it’s doing, it could be a long season for one super talented Minneapolis kid on the Cardinals roster.

And Larry Fitzgerald, Jr. will be unencumbered by any contractual obligations after this season.

Speaking of Tarvaris Jackson: Seahawks coach Pete Carroll has just declared him his starting quarterback. Though I think that’s a little rash, good for TJax.

Though he was maddening as a Viking for his seeming inability to progress as a quarterback, he was also badly mishandled by Brad Childress, Quarterbacks Guru, from the start.

Moving up into the second round of the draft to reach deep into the sixth to pick Jackson placed an unfair burden of expectations for Jackson, his own expectations, those of his teammates, and the fans. As a quarterback from a small school, Jackson was clearly in over his head but never really given the proper time and patience to develop.

Hopefully, a change of scheme and scenery will do him well.

The Vikings appeared to be close to signing Packers receiver James Jones, only to have him re-sign with Green Bay after a heavy-handed lobbying effort by Aaron Rodgers and Donald Driver and the Vikes look like they have no interest in diva receiver Braylon Edwards.

The Vikings did sign former Atlanta receiver Michael Jenkins who is a possession receiver but at 6’4″, 217 lbs., is a big target but not the outside threat the Vikings need. For now, that receiver remains Bernard Berrian.

The Vikings signed Erin Henderson and are giving him first-team snaps a the weakside linebacker position while they do not appear to be pursuing Ben Leber. Looks like it’s Erin’s job to lose.