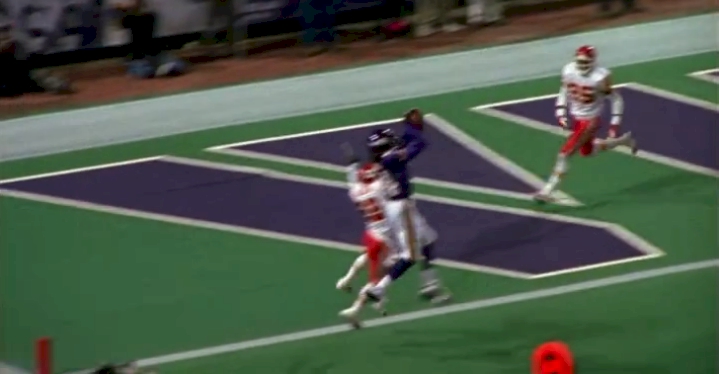 Randy Moss Scores Against The Chiefs, 2003

I was sad to learn yesterday that Randy Moss has decided to retire.

Moss had more talent than all of them but the shame of it is, he didn’t make full use of those freakish abilities.

At 6’4″ and 200 some-odd pounds with long arms, great ups, incredible hands, and 4.3 speed, Moss was a nightmare for defenders. So much so that the Green Bay Packers stocked up on 6-foot cornerbacks the draft following Moss’ rookie year. So much so that the phrase “a safety over the top” became a common phrase in Vikings fans’ lexicon because that’s how defenses were forced to play him.

You couldn’t really appreciate what Moss did to defenses if you hadn’t actually attended a game and saw how deep opponents placed their safety to ensure Moss wouldn’t just run by them. Television simply cannot capture the stretch of field between the line of scrimmage and the last line of defense marked by that lone, deep safety. The cushion defenses gave Moss opened up the running game, not that the late-90s Vikings really needed it with Moss on their team.

One of my favorite Randy Moss plays was one that demonstrated his remarkable field awareness and body control. It was a game against Denver at the Dome, I don’t recall the year. It was the last play of the first half and Daunte Culpepper threw deep to Moss as the seconds clicked off the clock. Moss caught the ball at about the twenty with two defenders converging on him, as they were bringing him down, Moss tossed the ball with a no-look shovel to Moe Williams who was trailing the play and who took the ball in for a score.

And that was just one of many, many fond memories of a remarkable talent. I’m just happy I got to see him play.

THE PROBLEM WITH McKINNIE

Yeah, I know, where do we start?

Those of you who have been Minnesota Vikings Chatonians through last year have heard my rants about Bryant McKinnie and his horrible pass blocking or his laziness as a run-blocker.

It wasn’t just me.

The Vikings decision to sign free agent tackle Charlie Johnson, Peyton Manning‘s former left tackle, looks like it has as much to do with McKinnie’s laziness as anything.

McKinnie has been put on the reserve/non-football injury list as he apparently attempts to get into football shape. Reporters have commented that he appears overweight.

While a lot of fans are complaining about the failure as of yet of the Vikings to bring in a big-name receiver, the biggest question mark for the offense right now has got to be the offensive line.

The addition of Johnson should, at the very least, motivate McKinnie to reach his potential.

Pioneer Press reporter Brian Murphy had a fantastic piece in Sunday’s paper about 1961, the year the Twin Cities landed both the Minnesota Twins and the Minnesota Vikings, that details the intrigue and machinations that brought the two teams here. It is a great piece of history and a fantastic read. [READ.]