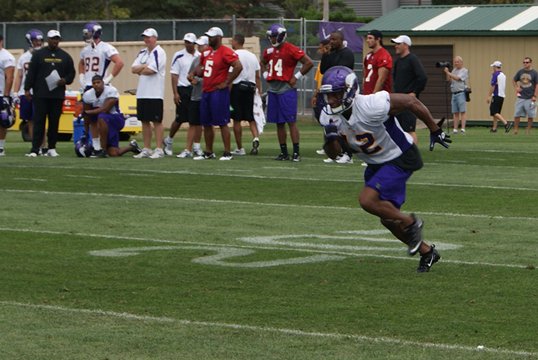 While the Vikings receiving corps don’t look all that at first glance, I don’t think we can just assume doom and gloom right from the start.

The brightest positive, of course, is Percy Harvin, assuming he’s not debilitated too much or at all by his migraines. We know what Harvin gives us and it will be electrifying. He’s come into camp lighter, so may be that makes him faster and able to stretch the field…but that’s not supposed to be his role.

I’ve been pretty critical of Berrian in the past but that was in no small part due to his huge contract, which I don’t think he ever earned. He’s redone his contract, so let’s put that aside. Berrian clearly didn’t develop any chemistry with Brett Favre, but he did gain nearly 1000 yards, averaging 20 per catch, and scored seven touchdowns in 2008, his first year as a Viking.

It’s tough to judge the newly-acquired Michael Jenkins because there’s practically no video of the guy online. Here’s what we do know about him: He’s big, at 6’4″, 217 lbs., and, according to Pioneer Press‘ Jeremy Fowler‘s reporting, he can be used to stretch the field. He quotes offensive coordinator Bill Musgrave talking about Jenkins:

“He’s not going to be able get in and out of breaks like a Percy Harvin or Steve Smith. But Mike has his strengths, and he’ll be smart. He’ll be able to play all of our wide receiver spots and fill in and adapt and adjust if something happens that is unforeseen.”

Keep in mind here that Sidney Rice was not fast, yet he was an effective deep threat because he used his body effectively and took the ball away from defenders.

And all we really know about Devin Aromashodu is that at 27, he’s relatively young, and he came in and kicked the Vikings ass as a Chicago Bear.

Then there’s Jaymar Johnson who is getting the raves early in camp because he seems to have stepped up his game.

Those guys look to be the main players and the rest of the receivers will likely battle it out for what’s left.

The one important thing to keep in mind–and this should apply to the whole team, not just the receiving corp–is that our coaches appear to have a far different philosophy than Brad Childress had.

Childress’ approach was My Way Or The Highway. He had his system, you had to run it, fit within it, but there would be no deviation from The System.

It is the philosophy that has served Bill Belichick so well.

So: Hold your breath. Let’s see what we get from these guys.

For your Throwback Thursday video features an early season, Week 2, match up of the Vikings at Detroit. [WATCH: Vikings at Lions – 1974, Week 2.]