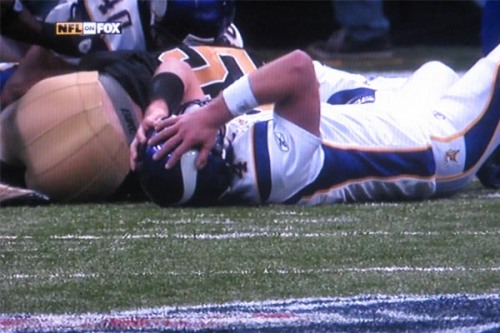 Brett Favre writhes in pain after the illegal "High/Low Hit"

It is about this time of year when I begin to get my hopes up for the coming season and I always think, well, there’s a chance…

Some time ago I participated in a round-table discussion with a handful of Minnesota sports fans and Pioneer Press reporter Brian Murphy for a series articles he was working on about the championship drought for professional sports teams in Minnesota. With the exception of the Twins two World Series championships, the Minnesota sports scene has not seen a pro team win the big one during the 50 year history of our state’s modern pro sports franchises.

Maybe I’m an optimist where this is concerned but I’m fairly sanguine about our teams’ prospects. And judging from the comments I see in social media, I think I’m probably the exception.

I do see a lot of fatalistic attitudes from fans when it comes to whether we’re ever going to make it to the promised land. I think the Millennial generation especially has a bit of an inferiority complex when it comes to our pro sports teams.

I understand it; I did too.

The most powerful emotion I remember from the 1987 Twins World Series championship was “finally!” Finally, a Minnesota team has won it all.

Maybe the reason I have a different attitude has something to do with the fact that my football awakening, as it were, occurred at a time when the Vikings were perennial favorites to make it to the Super Bowl.

I idolized Hall of Fame quarterback Fran Tarkenton and our first amazing running back, Chuck Foreman, growing up; I first learned about injustice at the hands of Drew Pearson.

Maybe that assumption that my team was going to go far that year has simply carried over year to year. But as much I want to see the Vikings win a Super Bowl before I die, for me it’s as much about the ride as it is the destination.

I think it especially helps us football fans that the NFL has really figured out how to structure the league so that fans can legitimately believe their team has a shot at it all at the beginning of every year (except for the Lions, of course; remember, I said legitimately).

From the way the draft is conducted (compared to, say, the NBA) to revenue sharing that keep teams from simply buying championships (can you say Yankees and Red Sox?) year in and year out, to scheduling that favor the weaker teams from the year before, every year it seems like you’ve got a chance.

And so, even this year, with all the uncertainty and lack of time to prepare, I still have hope. I hope you do, too.

READ: Where’s The Hope For Twin Cities Pro Sports Fans?
READ: The Fans’ Take: A Round Table Discussion Of The Struggles Of Minnesota’s Pro Sports Teams