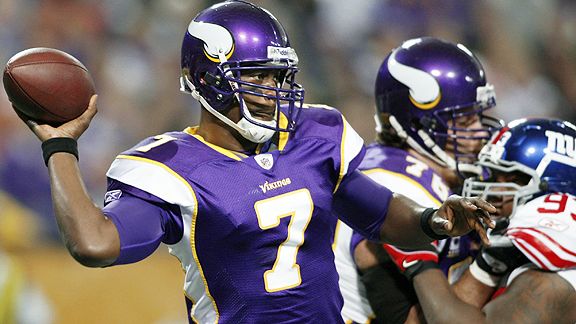 Tarvaris Jackson has finally spoken up about how he felt he was treated by former Vikings coach Brad Childress and his new team agrees that he was “jerked around,” according to Seahawks coach Pete Carroll.

TJax told all to Yahoo! Sports’ Michael Silver in a story published Sunday.

Seattle general manager John Schneider chimed in, as well: “He’s 28 years old, and quite frankly was [bleep] on for four years.”

Jackson cites the 2008 season when he got pulled after two games and that’s true; you’ve got to give a young quarterback his losses so he can get the experience he needs to learn the game, the position, and how to win. Jackson also cites the will he/won’t he drama of Brett Favre‘s two seasons.

I’ve always contended that Jackson was treated unfairly before he even joined the team simply by being drafted too high–in the second round where he probably should have been picked in the sixth of seventh rounds–and Childress traded up to pick him too high.

That created enormous and unrealistic expectations for a player from a small school who probably was going to take longer than usual to develop.

In Childress’ defense, though (and I’m certainly not in the habit of defending him nor am I, come to think of it, much in the habit of defending TJax…as long as he’s not starting, I think I’m fine defending him), Jackson did not seem to progress all that much as a quarterback or even learn much from his mistakes. He seemed to have physical limitations, as well: The ability to stay healthy and he couldn’t throw accurately deep, for instance.

But most of that might be on Childress and the previous regime.

We’re about to find out. The move to sign Jackson makes some sense for Seattle and, under a new coach who has just named him the unquestioned starter, maybe he can flourish.

I hope so because I don’t think he really had a chance here.