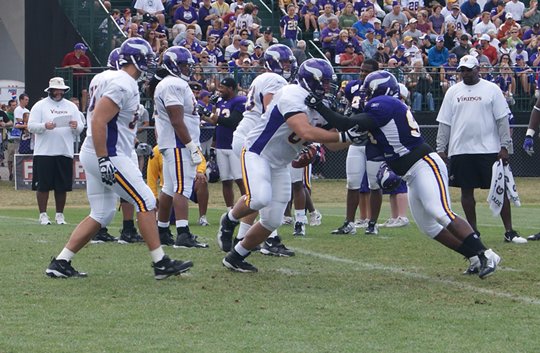 A WORK IN PROGRESS

The Vikings biggest offensive, let’s say “question mark” rather than weakness, going into the season I think is pretty clearly the offensive line.

That would’ve been the case even if Bryant McKinnie hadn’t tipped the scales at 390 pounds. McKinnie had been questionable for at least the past two seasons in both run blocking and pass protection, so I’m not going to wring my hands now that he’s gone.

Newcomer Charlie Johnson replaces McKinnie at left tackle but all we really know about him is that he protected Peyton Manning‘s blind side for several years, so that’s encouraging.

Steve Hutchinson returns at left guard and though he’s getting up there in years, if he stays health this year that spot should be fine.

John Sullivan has had a problematic career thus far and that might be the most troubling thing about the Vikings offensive line this season. The center position is obviously a crucial one, making the line calls as they do, but you also need to be big and physical and fast enough to keep from getting blown up the way Sullivan has too often gotten blown up during his career. Our games against Detroit and the paper lions they’ve got up the middle this year might get awfully long this season. If Sullivan can’t cut it, next in line would be untested Jon Cooper or rookie Brandon Fusco or maybe Ryan Cook.

Let’s just hope Sullivan settles in this year, figures it out, and stays healthy because we could really use some stability at the position right about now.

Right guard Anthony Herrera may start the season on the PUP list so Chris DeGeare or Ryan Cook would start there, and I’m fine with either one. I like what I’ve seen so far from DeGeare and Cook has proven to be a valuable utility backup but he’s never really been able to do it over the long haul.

I thought Phil Loadholt improved a great deal over the course of last year. My worry with him has always been the bad influence of Bryant McKinnie, and, to be clear, I’m not talking off-the-field influence. I’ve always been worried he’d play lazy like McKinnie and not finish blocks and half-heartedly throw an arm at a defender rather than trying to get a solid hit on him.

Happily, it appears to have been a misplaced worry. Reporters are gushing over the shape that Loadholt is in this summer, so if he continues to improve his game, we should be good to go there.

An offensive line, of course, needs time to learn to play together, as a unit, and that is a luxury we will not be afforded this year. With all the moving parts, with a new quarterback learning the system, this line should be a work in progress for at least the first half of the season.

I expect early-season games to feature a lot of running, a lot of two-tight end sets with Jimmy Kleinsasser, not Kyle Rudolph, accompanying Visanthe Shiancoe to help block, and the running back doing a lot of chipping on passing plays.

So we shall see…