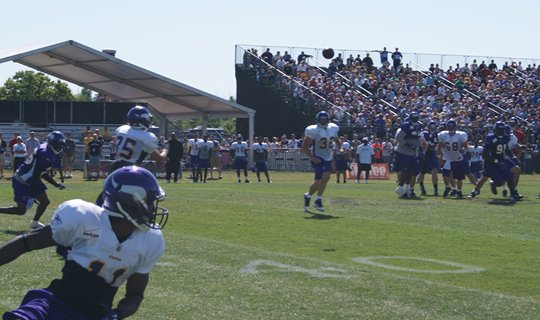 The Offensive Line: I’ll be watching the line as a whole but obviously, I’ll be paying close attention to McNabb’s blindside to see how newcomer Charlie Johnson holds up.

He’s had a shaky camp, which is understandable given the circumstances, but how much of that was due to having to line up against one of the best pass rushers in the league in Jared Allen?

Not that Johnson’s performance tomorrow night will be indicative of what we’ll get from him all season but this is our first chance to see if he’ll be an improvement over Bryant McKinnie.

Donovan McNabb: I know he’ll only get a few snaps so at this point I just want to see how comfortable he looks. And, of course, it will be fun to see how Joe Webb and Christian Ponder…and Rhett Bohmar?…play.

Bernard Berrian and Michael Jenkins, et al: Leslie Frazier and company seem to be chalking up last year to a lack of chemistry between Brett Favre and Bernard Berrian.

The most obvious manifestation of whether or not Berrian and McNabb have a connection will be the number of times McNabb throws to him and the number of those tosses Berrian catches. There won’t be enough time to really gauge this, but still…

As far as Jenkins and the rest of the new receivers are concerned, I just want to see what we’ve got.

Jaymar Johnson: He’s always performed well in the preseason, so there’s that, but given the glowing camp reviews, I’ll be keeping an eye on him, too.

Kyle Rudolph: The rookie tight end was a tad defensive about dropping a touchdown during practice this week, which was cute, but we should get an extensive look at what he can do Saturday night with Visanthe Shiancoe sidelined as a precaution to let his hammy rest. Are his hands as good as advertised? How does he run his routes? Can he block?

Ryan D’Imperio: The converted linebacker was a favorite of mine last preseason but that might’ve been mostly because Naufahu Tahi was still on the roster. Since I don’t have Tahi to kick around anymore, I’ll be watching D’Imperio to see whether he can actually be an NFL fullback.

His performance, one way or another, will likely have an effect on Jeff Dugan‘s future with the team and/or how much time Jim Kleinsasser will see in the backfield.

Defensive Line: I know a lot of people are worried about the lack of Ray Edwards on the left side but I think Brian Robison will do just fine. I am far more interested in how Remi Ayodele stops the run and whether or not he can scoot down the line of scrimmage the way Pat Williams used to do and chase down a run from the backside.

I’ll be watching the secondary as whole pretty closely. Chris Cook‘s rookie outing was disappointing to say the least but we can chalk that up to injuries; with him healthy now, let’s see if he can earn the same rave reviews he did last preseason this year.

We saw a lot of Asher Allen last year and it wasn’t all good. Has he improved?

We didn’t go out and find an upgrade over Madieu Williams in free agency, so we’re stuck with who we have on the roster. Whoever wins the starting job I’m sure will be an upgrade; the question is, how much of an upgrade will he be?

For the defense as a whole: How many dropped interceptions will there be?

The Vikings travel to Tennessee to play the Titans Saturday night. Kickoff is at 7 PM CST and the game will be broadcast on KARE-11 TV. A rebroadcast will air on Monday, August 15, on Fox Sports North at 11 AM CST.

Your play-by-play guy will be Ari Wolf and Mike Mayock will be your analyst with Randy Shaver serving as the sideline “reporter.”

Vikings: Gaurd Anthony Herrera is on the physically unable to perform list; tight end Visanthe Shiancoe tweaked a hamstring and won’t play and linebacker Kenny Onatolu is still out nursing his fractured foot. Cornerback Cedric Griffin will be held out for precautionary reasons as well.

While I have written already about Vikings punter Chris Kluwe‘s deal he brokered with Donovan McNabb for his number 5 jersey, I was so impressed with Kluwe’s marketing savvy that I expanded on my thoughts last week in my Daily Numbers marketing email newsletter. [READ] and/or [SUBSCRIBE].