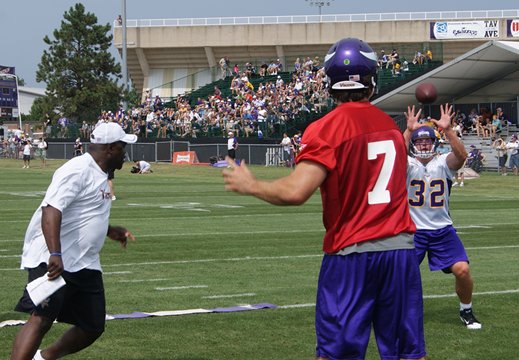 Remember back in the day when all the stories came out about Vikings running back Robert Smith and his telescope? About how smart he was with a underlying condescending incredulous tone?

I haven’t really seen any for our super smart rookie quarterback Christian Ponder. Sure there have been stories about how quickly he got his degree but none of them have had that air of novelty. I suspect the formula doesn’t apply to quarterbacks because they’re presumed to be intelligent.

John Glennen published a story on The Tennesseean blog Sunday quoting Titans safety and former college teammate of Ponder, Myron Rolle, about how smart the rookie is:

“He’s a very smart person, incredibly smart, one of the smartest I’ve met. He’s borderline genius. So I don’t think it will be an issue for him at all to get adjusted mentally to the (professional) game….He has a mind outside of just book-smart. What I like to call it is applied knowledge. He can understand things. He grasped our teams at Florida State very quickly. He grasped social concepts at Florida State very quickly. He’s very impressive.”

As a non-quarterback former Rhodes Scholar, Rolle is the more likely subject of the Behold, The Intelligent Athlete! story. He plans on becoming a neurosurgeon after football.

It’s too bad Glennen didn’t ask him some questions about how neuroscience might provide some insight into how a quarterback can become a great quarterback. I guess he decided to leave that up to me.

(I’m no neuroscientist but I play one on a sports blog.)

It’s awfully good for us that Christian Ponder appears to be a super quick study because he’ll need that if the plan is to play Donovan McNabb for a year and start Ponder in 2012. Studying the playbook and learning from McNabb about how to apply it on the field is one thing but there’s nothing like experience in the education process of a young quarterback.

There’s a reason for the cliche “practice makes perfect.” Through the repetition of throwing an out route, for example, a quarterback develops muscle memory. What that means, essentially, is burning a neural pathway in your brain so you don’t think about throwing that type of pass, your muscles (but more accurately, your brain) simply remember how to throw it. The neural pathway contains all the information necessary for the perfect out route: The accuracy and velocity required for the throw, how far to lead your receiver, when not to throw it based on the position of the defender.

Instead of thinking about all those things, that information is simply there, contained in the neural circuitry, so the quarterback can execute the throw flawlessly, immediately.

This same concept applies to other parts of the game such as reading defenses and pass coverages. But that can only be built through experience, through repetition of seeing defenses and coverages over and over again.

And that’s why they say that quarterbacks only really understand the game as they approach their thirties.

So say what you will about Ponder’s intelligence but there’s no substitute for experience.