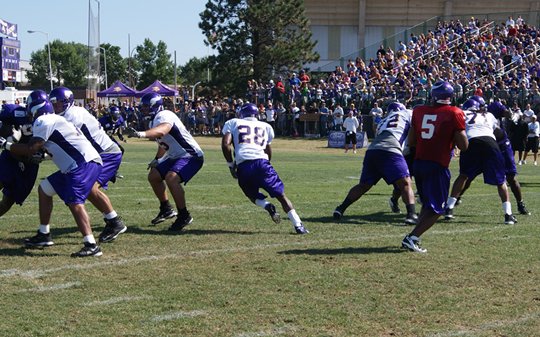 I know the focus this preseason has been on Adrian Peterson‘s role in the passing game. I know he approached offensive coordinator Bill Musgrave to lobby for a larger role catching the ball. I know Peterson’s excited about the new system and play book and the opportunities for him to get involved in the air game. And I know the focus has been on all the drops he’s had this training camp.

But for my money, the way Adrian Peterson can improve in the passing game is to focus on learning to better recognize and pick up blitzes and his overall blocking in pass protection. If he became a superb backfield blocker, that would go a long way to turning him into a complete back.

It’s not like Peterson has never been involved in the passing game: He’s caught more than 100 passes for more than 1000 yards during his career. And despite the dropped balls, I actually think he’s got pretty good hands. I don’t think that’s really his problem.

I do think he’s not very good at blocking, though.

It took Peterson three seasons to recognize he had a problem protecting the ball and one season to rectify that problem. The good news is, he has proven he can improve an aspect of his game; the bad news is, it might take him a while to identify that weakness. Let’s hope it doesn’t take that long for his blocking to improve.

The one thing in the passing game I’ve always wanted to see but have never actually seen the Vikings use Peterson this way, is line him up out wide and send him deep. He’s certainly got enough speed to get by defenders. I can only assume the reason they haven’t employed him in such a manner is he has trouble catching the ball over his shoulder. And probably he’s not the best route runner in the world.

Still, that’s less important than the blocking. I’d prefer he focus on that this year and then tackle catching the ball and route running next year.