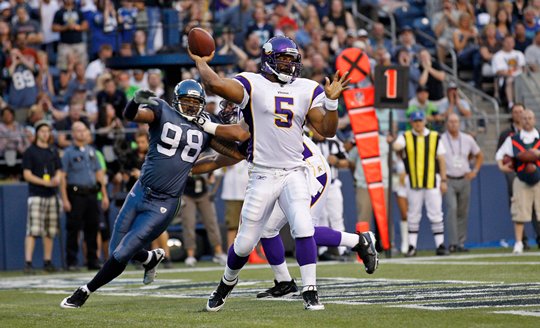 Donovan McNabb & Company: Aside from the sack that Charlie Johnson gave up on a missed assignment, the evolving offensive line played fairly decently, all things considered. We got to see extended action from veteran Scott Kooistra at right guard and he played well.

Whether by design or not, the Vikings stuck to a short passing game so we couldn’t really tell how the OLine would hold up having to pass protect for a few more seconds than those short and intermediate routes require. As ESPN Twin Cities’s Tom Pelissero points out, the team is getting close to decision time with regard to Anthony Herrera, so keep an eye on the right guard position.

You gotta be happy with the long drive Donovan McNabb engineered that included a beautiful scoop by rookie tight end Kyle Rudolph of a pass thrown at his ankles and behind him, a great catch and run by Jimmy Kleinsasser that went for 23 yards, an excellent diving catch by Michael Jenkins, and another nice catch by Devin Aromashodu.

Jenkins came to the Vikings billed as a great blocker and he certainly showed why on that drive. executing perfect blocks on three plays but whiffing on one. Even with the missed block, the guy’s got great technique.

The drive stalled and the Vikings settled for three but only because rookie tight end Kyle Rudloph stopped running his route. McNabb did a great job of delivering the ball to the middle of the field that had been vacated by a full-on blitz and where he expected Rudolph to be but Rudolph had stopped short.

There’s nothing more frustrating for a quarterback than when receivers pull up short. Part of the quarterback’s job is to anticipate where receivers will be and put the ball there but the receiver’s job is to run his damn routes!

Had Rudolph actually finished his route, he likely would have had a reception at the least and, given his momentum, probably would’ve scored as well.

At this point I’d say Devin Aromashodu is the front-runner for the open receiver position. Though he apparently doesn’t return kicks, Aromashodu has got an intangible that I don’t see in his competition: He has an excellent ability to locate the ball, and, just as importantly, fight for it. I haven’t seen that out of Jaymar Johnson, Juaquin Iglesias, or Emmanuel Arceneaux, who is going to have to “flash” (see below) in the remaining preseason games to make up for his fumble through the back of the end zone.

Draft pick Stephen Burton had a nice catch from Webb by coming back to the ball then turning it upfield and fighting for a first down to convert on third. He needed it, too, cause the dude’s been dropping passes in practice.

The most impressive thing about Christian Ponder so far this preseason has been the fact that he hasn’t turned the ball over. That is usually the most glaring problem with rookie quarterbacks: They stare down receivers, they hesitate on their passes, giving defenders an extra second to get to the ball, they don’t protect the ball when the pocket collapses. Ponder demonstrated his skill for protecting the ball on a bootleg run to the left when he switched the ball from his right arm to his left, outside arm as a defender approached.

That said, Ponder nearly turned the ball over for the first time on an ill-advised shuffle pass to Toby Gerhart, who had a defender all over him and, were the defender agile enough, could have easily picked it off and taken it to the house.

While Ponder made some nice passes, he also had his share of poorly thrown balls: A jump ball that hit a defenders back, not exactly where a quarterback wants to put that kind of a pass, a pass that hit the dirt in front of Jeff Dugan, he missed Dugan again on a third-down crossing route, and had another pass that hit a defensive lineman’s helmet.

For the second week in a row, Ponder placed a deep pass to the end zone nicely away from defenders to where only his guy, in this case Lorenzo Booker, could get it but it appeared Booker pulled up short.

Joe Webb ran the third stringers and had them moving nicely on what looked to be a scoring drive, were it not for Arceneaux’s fumble. He needs to work on his long-ball accuracy, though; he had two passes that could’ve gone for long gains had he not overthrown his receivers.

The Vikings third-stringers did score on a very nice cutback run by running back Tristan Davis, who I would hope we could get a look at with the second or first team offense. I mean the guy took his first touch of the preseason 35 yards for a score.

VIDEO HIGHLIGHTS
The video highlights from the game are at the site and include extensive footage of the long offensive drive. [WATCH Video Highlights of the Minnesota Vikings Preseason Victory Over the Seattle Seahawks.]

The number of times Ari Wolfe or Mike Mayock abused the world “flash” during the game.

The primary definition of the word flash is: A sudden brief burst of bright light or a sudden glint from a reflective surface.

Wolfe and Mayock were using it to describe players’ attempts to make plays that would get the attention of Vikings coaches as they compete for a roster spot.

At one point Mayock said “Cord Parks is another guy that flashed for me tonight.” WTF?!? Are you suggesting the guy is a perv, Mayock?

Sorry, but it annoys the hell out of me when people who get paid to communicate for a living use words for which they apparently do not know the meaning.

You heard me rant last year about alleged sideline “reporters” and the fact that they generally don’t report much at all. Saturday was a case in point. The interview with Donovan McNabb gave Eric Perkins a sound bite but McNabb didn’t say a damn thing.

The fact that these “reporters” are posing questions to players merely because they are required to have an interview to fill in the scripted programming of the game usually results in the awkward display you saw last night as Perkins attempted to “report” from the sidelines and it unnecessarily takes away from the action on the field.

Sideline “reporters” should only report when they’ve got something to actually report, like, say, an injury update. Or just do away with the fiction entirely.