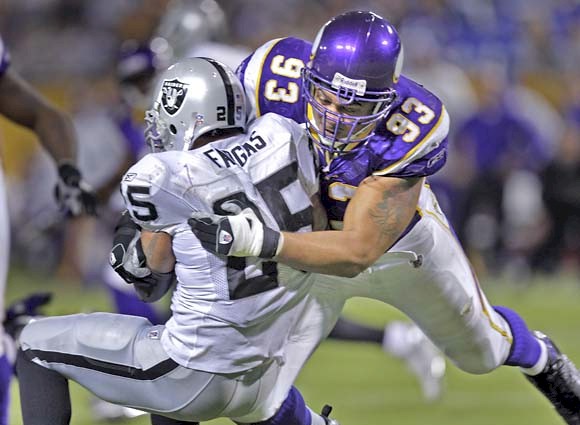 Vikings fans drew in their collective breath when it was reported that their star defensive tackle was visiting a foot specialist. We were told to let our breath out when he returned with a diagnosis of only plantar fasciitis rather than what might’ve been a far more serious fractured foot.

That is, after all, what we usually hear after a player returns from a foot specialist.

While plantar fasciitis is not nearly as serious as a fracture, obviously, it is still a nasty injury. At its worst, the injury can cause extreme pain in the soles of your feet because the tissue that stretches along the bottom of your foot from your heel to your toes–the plantar fascia–becomes inflamed.

It can be disabling.

I know because I’ve had it in both feet. At the same time.

It was extremely painful to just get out of bed in the morning. I’d have to walk on the sides of my feet until my feet were stretched out enough so that it was bearable to walk properly.

Because I was ignorant and stubborn and stupid on top that because I didn’t want to stop playing football, I played through the injury for quite a bit of time by eating lots of ibuprofen and using plenty of Icy Hot on my feet before games.

That got me through bearing the pain for a while but the injury only got worse…to the point where it was too painful to shift gears on my manual transmission Jeep after a game one night.

So I’m not recommending that course of treatment for Mr. Williams. Or anyone else.

It only got better after I stopped playing football for a while (surprise!), began stretching my feet regularly, soaking it in hot water, and icing it after stretching but, most importantly, resting it.

This video from the Mayo Clinic explains the injury and how to treat it: WATCH an explanation of Plantar Fasciitis.

The good news is, it does get better with rest so the Vikings will sit Williams for the remaining two preseason games and hope he fully recovers in time for the season opener at San Diego.

The only problem is the injury can easily flare up if he comes back too soon.

And this is where, ironically, the punishment the NFL has yet to mete out to Williams for taking banned diuretics comes into play. We’ve yet to hear how long Williams’ suspension will last (two to four games) and when he will serve it but if this injury lingers, it may actually help him by forcing him to rest and recover.

If he doesn’t end up beginning the season serving the league sentence, and if the inflammation returns, he may be able to battle through it until his punishment forces him off the field…to recover.

In more sobering injury news, right guard Scott Kooistra, who continued to play several snaps after suffering a severe injury to his C-2 vetebrae near the top of his spinal column [SEE THIS DIAGRAM], underwent successful surgery in Seattle Tuesday night, according to StarTribune‘s Mark Craig.

Kooistra has been place on injured reserve, ending his season, but right now the most important thing is obviously just his health.

It’s a very tough break for both Kooistra and the Vikings, because his performance Saturday would likely have put him in the running for a starting spot on the line.