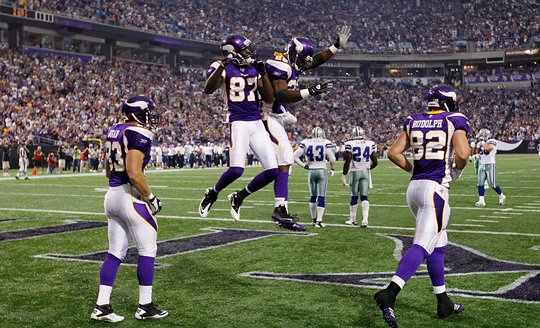 Donovan McNabb: Again, he looked comfortable in this offense. The decision to bring him in looks better by the game. McNabb made some great throws and managed the offense like the veteran he is but had one ill-advised pass that should’ve been picked off.

Adrian Peterson: He looks to be ready to tear up the league again: 14 carries for 81 yards and a 5.8 yards per carry average. That’s all you need to know about that.

Bernard Berrian: Can still play some. Berrian had a 49 yard touchdown reception on the first offensive series for the Vikes by getting a step on his defender and focusing his concentration enough to catch the ball through the hands of the safety.

He probably would have had another touchdown had McNabb not underthrown the ball. The sooner McNabb realizes Berrian is not a fight-for-the-ball receiver, the better off we’ll all be. Leave that to Devin Aromashodu and Michael Jenkins.

Michael Jenkins: Jenkins just makes plays when he’s got the opportunity to make them. For the second game in a row, he muscled the ball away from a defender who was in better position to get the ball. Throw in his awesome blocking skills and you got a very good football player.

Offensive Line: The offensive line looked goooood! They manhandled the Cowboys defensive line in the run game and kept McNabb pretty clean with the exception of one sack. Charlie Johnson had his best game yet and Anthony Herrera looked great as well in his first game back from his torn ACL injury. Center John Sullivan got through the second level and put a nice seal block on a cornerback to make some room to spring Peterson for a nice gain up the middle.

Joe Webb: Webb turned in another strong performance, I thought. He make a nice pass over a defender toward the sideline to rookie tight end Kyle Rudolph, who couldn’t haul it in. Webb’s 44 yard pass down the left sideline to Emmanuel Arceneaux was placed on the outside shoulder where only Arceneaux could get it and the receiver who a game earlier fumbled what might’ve been a touchdown catch, made a nice catch of this one on a difficult play.

Webb capped his first drive with an exciting 10 yard touchdown run that highlighted his explosiveness as a runner and added another 36 yard run during his second drive.

Christian Ponder: The highlight of Ponder’s first series was him missing a snap that he eventually recovered but resulted in a long sack that stalled the drive.

With a minute and two seconds left, Ponder used his second drive to work on his one-minute drill skills and managed to move the third teamers effectively to Dallas’ 35 yard line before time expired.

Ponder threw a fantastic pass over a defender to Stephen Burton on the sidelines and he made the right decision a few plays later to throw the fade to him even though Burton read the defense incorrectly and ran the wrong route.

Kick-Ass Offense: I think this is what Brad Childress was aiming for without really knowing how to execute it: Run, run, run Adrian and then make them pay for stacking the box by stretching the field over the top.

Bill Musgrave looks like he’ll have much more success with that formula since it appears he’s much more an artist in the play-calling department than the brutally predictable Childress/Bevell combo.

I am liking the bunch formations. A lot. Musgrave has Jimmy Kleinsasser, Jeff Dugan, Kyle Rudolph, and, when the season begins, Visanthe Shiancoe as a quartet of talented tight ends and it looks like he knows how to use them.

That’s a nice combination of big, strong, and soft to work with. I mean soft as in soft hands. Kleinsasser, rockstar blocker that he is, is a very underrated receiver and Rudolph and Shiancoe are threats down the field.

Put them in a bunch and/or move them around pre-snap and the defense has a hard time guessing run or pass.

One play began with Rudolph in a three point stance next to the left tackle and Kleinsasser in the same position on the right side. Right side, run, right? But then you flip those two pre-snap and is it a left side run or might Rudolph leak out into the flat or head down the seam?

Another play with a three tight-end bunch saw Jeff Dugan as the lead blocker for a nice Adrian Peterson run up the middle.

Throw Shiancoe into the equation and you’ve got a lot options that will keep defenses guessing.

7
The number of times Ari Wolfe and Mike Mayock abused the word “flash.” They started out by using the word only once in the first half, but then exploded for six more “flashes” in the second half but that was still far fewer times than they abused the word during last week’s game.

VIDEO HIGHLIGHTS
Video highlights from Saturday’s loss to the Cowboys are at the site, [WATCH.]