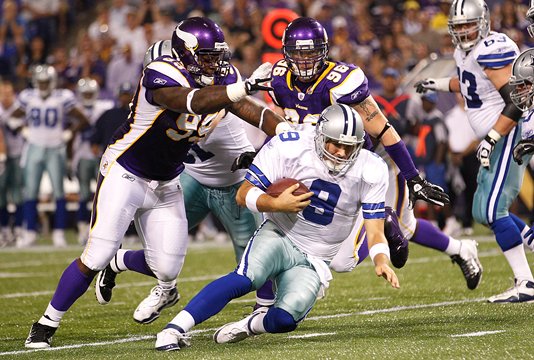 The Starters: When the first teamers were in, this defense looked great, even without Kevin Williams. Jared Allen applied consistent pressure, as you’d expect but Brian Robison did the same on the left side, which is great to see.

I’ve long thought Robison was the better pass rusher between him and the recently departed Ray Edwards but the question with Robison has been his ability to stop the run…and we don’t know how he’ll hold up as a starter for 16 games.

His tackling remains a concern. Robison missed a tackle on tight end Jason Witten during the defense’s first series and then again later, though neither Husain Abdullah nor Brandon Burton helped him out on the plays either. But he also had a great open-field tackle on Felix Jones.

On the flip side, Robison got great pressure Saturday night, nearly knocking the ball out of Tony Romo‘s hand during the first series; he executed a spin move beautifully that nearly lead to a sack; and both he and Allen applied pressure that did lead to the sack defensive tackle Christian Ballard was credited with.

Ballard will play some at the end position on Thursday because the coaching staff believe he can give them some flexibility along the line. That belief has contributed to the decision to experiment with Everson Griffen at weakside linebacker in certain packages.

The radio guys are playing this as a move that indicates the coaches are not satisfied with Erin Henderson‘s play there.

I don’t buy it. Radio guys need to fill hours of airtime and the Erin’s Gonna Lose His Spot topic can eat up some time.

Henderson’s play hasn’t blown me away but it hasn’t been awful, either. And there’s no indication he can’t become a solid linebacker with the experience he’ll only acquire from playing.

I think the move to experiment with Griffen is a result of the Vikings lack of linebacker depth at the moment (Jasper Brinkley, Heath Farwell, Kenny Onatolu and Ross Homan have all been injured and David Herron was only recently added to the roster) and a way to get a talented athlete on the field.

Griffen, after all, backs up Jared Allen, who rarely comes off the field and I think the Vikings are liking what they’ve seen from Adrian Awasom on the other side. Griffen is athletic and even at 273 pounds can run a 4.5 forty yard dash. That doesn’t mean he can be effective in coverage but he is fast for a guy his size, so why not find out what he can do there?

With the depth and talent the Vikings have on the line, I woudn’t be surprised if Fred Evans gets cut.

Speaking of linebackers, both E.J. Henderson and Chad Greenway looked in top form Saturday night, so no worries there.

At the corners, when we had our preferred three of Antoine Winfield, Cedric Griffin and Chris Cook on the field, the unit looked great even despite Cook’s pass interference penalty. Griffin looked like he held up very well during his most extensive duty yet this year. If both he and Cook can remain healthy this year, that will go a long way toward improving the defense’s performance from last year.

The problem, of course, is with the dime back, where Asher Allen was over matched last year and has been sidelined with a toe injury of late. And that has given Marcus Sherels plenty of opportunities to make his case and he continues to make a loud statement that he belongs. The third down pass he swatted away from the receiver, forcing a field goal, demonstrated textbook execution.

Rookie Brandon Burton had tight coverage on the pass that wasn’t a touchdown and Cord Parks showed some special teams talent with his 53 yard kick return.

With Sherels play throughout the preseason and Allen’s lack of special teams contributions, I wouldn’t be surprised if Asher Allen did not make the final cut.

Safety Tyrell Johnson apparently steadfastly refuses to make plays. The Tony Romo pass to Dez Bryant that Mike Mayock said was great because it was thrown “only where his receiver could get it,” was not great. It was a really, really poor decision by Romo and the only reason it didn’t get picked off and returned for a touchdown was because Tyrell Johnson was covering the receiver.

Johnson had inside position on the receiver but slowed down and then tripped himself up, preventing what should’ve been an easy pick-six. On the following play, Johnson failed to keep Felix Jones from the end zone on his tackle of the running back.

Johnson is the Tarvaris Jackson of the defense. He’s had so many opportunities to seize the stating strong safety position but he’s just never been able to pull it off. Jamarca Sanford has this one wrapped up.

The Vikings have had half the penalties (11) of that of their opponents (22) this preseason. I don’t know what the figures for previous preseasons were but given that that preseason games are notoriously sloppy as teams try an evaluate their players, many of whom will not make the roster, or even the NFL, for that matter, and then throw in the added factor of the lockout and the lack of offseason team activities, and I’d say that’s pretty remarkable.

That might be an indication that the Vikings are a disciplined team.