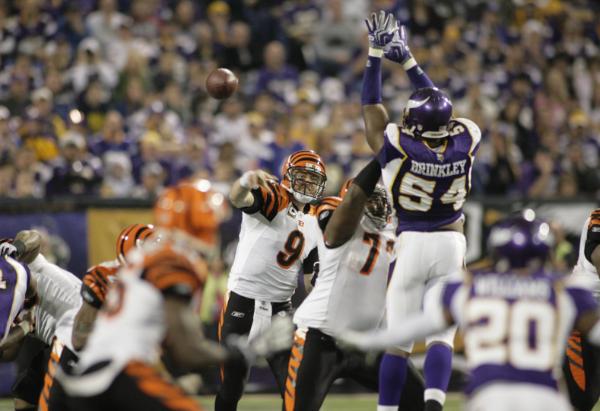 Yikes! It appears Jasper Brinkley will be on the shelf for an extended period if not placed on injured reserve, ending his season before it’s begun.

So now, in addition to the corner and safety positions, we need to worry even more about the linebacker corps. If Brinkley is done for the season, who will back up E.J. Henderson?

With the least salary cap space in the league, it’s unlikely the Vikings can go out and get a backup middle linebacker without reducing the cap numbers by either getting new deals done with Adrian Peterson and/or Chad Greenway, and that doesn’t look like it will happen any time soon, or cutting a veteran or two to squeeze a little blood from cap turnip.

David Herron signed with the Vikings the day before Saturday’s game and played middle linebacker on Saturday, so perhaps he’s the heir apparent to Brinkley.

While, given his own cap numbers and heated competition, it looked like Farwell may end up not making the roster this year, the exit of Brinkley may strengthen his hand. He’s a seven year vet who has never been able to claim a starting spot but he’s smart and could probably handle the play calling duties of a middle linebacker, if it came to that.

Or might the coaches slide Greenway or Erin Henderson to the middle, if E.J. went down and plug in a backup on the weak or strong side?

The Vikings haven’t articulated what the line of succession might be at middle backer and really won’t have to until Saturday’s cutdown date. That gives you another reason to watch tomorrow’s game; in addition to the backup quarterback battle, we’ll get to see extended action for potential backup middle linebackers.