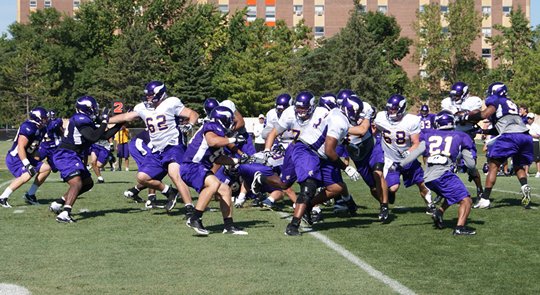 The Vikings host the Houston Texans tonight at Mall of America Field. Kickoff is at 7 PM CST and the game will be broadcast on KARE 11 TV locally.

With most of the starters sitting, tonight’s game will give us a very good look at the depth of our roster.

Christian Ponder & Joe Webb: Ponder will start the first half and Joe well will take the second half. You get the feeling Vikings coaches would prefer that Ponder demonstrate he’s capable of handling the offense should Donovan McNabb go down.

That, of course, would indicate Ponder has progressed nicely as a quarterback but it would also give them the flexibility to get Joe Webb on the field in a capacity other than necessarily quarterback.

The bottom line for a quarterback is scoring drives; can you march your offense down the field, culminating in a score?

Christian Ponder’s preseason drives have led to one field goal against the Seahawks.

Joe Webb led a drive that culminated in a field goal against the Titans; he led a drive against Seattle that probably should’ve ended in a score but for Manny Arceneaux‘s fumble at the two yard line; though he only handed the ball to his running back, another drive ended in a touchdown run by Tristan Davis; and finally, he ran for one himself against the Cowboys.

Though he’s far from a finished product, Joe Webb has more experience, looks more comfortable in the pocket, and is more capable of creating something out of nothing at this point than is Christian Ponder. Whoever lands at number two is likely to see at least some action this year; during his 13 year career, Donovan McNabb has played in all sixteen games for only four seasons.

Regardless of whether Webb starts the season at number two or number three, though, as I’ve said before, the Vikings quarterback situation is pretty rosy with McNabb at the helm and two talented young guys to learn from him on the sidelines.

We’ll get a long look at three running backs who are practice squad candidates: Tristan Davis, Alexander Robinson and the newly-signed Caleb King.

Will Ryan D’Imperio or Matt Asiata give the Vikings any reason the should go fullbackless this year instead of depending on tight ends to do the job?

Speaking of tight ends, will Allen Reisner continue to impress enough to bump Jeff Dugan from the roster? If not, could Reisner and his soft hands possibly make it to the practice squad without someone picking him up before he lands there?

At wide receiver, I think Devin Aromashodu has already earned a roster spot and the safe bet, you’d think, would be that Greg Camarillo with his experience, sure hands, and ability to…let’s not say return but rather catch punts, has got a spot locked up, too.

That leaves one spot left for the presumptive favorite Jaymar Johnson to lose. We know Johnson can return kicks but we’ve yet to see his vaunted speed manifest itself on offense. Emmanuel Arceneaux has made some plays, most notably the long ball he caught from Joe Webb last week but it’s hard too forget that fumble the two yard line against the Seahawks.

Juaquin Iglesias has had a few catches but nothing that made you go wow!

On the offensive line, it looks like we’ll have another good look at Anthony Herrera to see how he holds up. I’ll be paying close attention to rookie tackle DeMarcus Love and guard Seth Olsen.

I will be fascinated to see how defensive end Everson Griffen does at weakside linebacker. For this experiment to work, he’s got to show enough potential in pass coverage to keep teams from being certain he’ll blitz when he’s at that spot. Wouldn’t it be awesome, though, if we had a 273 pound linebacker who could cover?

Most of my attention for the defense will be focused on the linebacking corps, given the fact that we’ve likely lost Jasper Brinkley for the season and we’re banged up there as it is heading into a tough start to the regular season.

The defensive backfield is what it is. Though it looks like Marcus Sherels has displaced Asher Allen as the dime back, I doubt Allen’s roster spot is at risk.

The battle for the final spot, then, is between Brandon Burton, Cord Parks, and Tony Carter.

Devon Torrence has not played due to a quad injury but Rick Spielman has indicated the Vikes are very high on his potential, so look for him to land on the practice squad.

Our safety competition is what it is. Fred Pagac says it’s still neck and neck between Jamarca Sanford and Tyrell Johnson but really?? This might be Johnson’s last shot before the Vikings give up on him. At least one can hope.

With Husain Abdullah warming the bench tonight, will we get a good long look at Mistral Raymond, the guy who has created such buzz during the presason only to watch a sure interception slide through his arms?

For your Throwback Thursday video today, I give you the fourth quarter of the 1980 NFC Central Championship game between the Vikings and the Cleveland Browns. Called The Miracle At The Met, Two Minute Tommy Kramer brought the Vikings 80 yards down the field with 20 seconds on the clock culminating in a long bomb contested by Browns defenders bu ultimately hauled in by Ahmad Rashad for the win. [WATCH The Miracle At The Met – 1980 Championship Game – Vikings vs. Browns.]