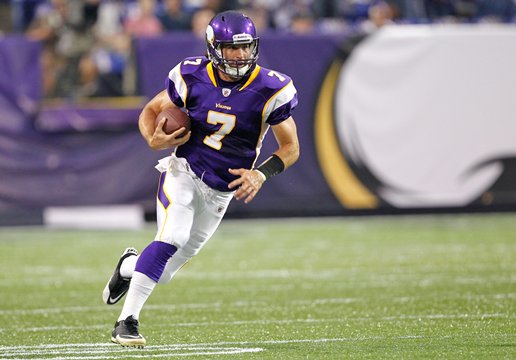 Quarterbacks: Christian Ponder had his best game so far but I still don’t think he’s done enough to earn the second string spot.

On the plus side, he directed two scoring drives, the first of which was capped with his first touchdown pass and rookie tight end Kyle Rudolph‘s first touchdown catch. The play was beautifully designed and Rudolph was wide open but Ponder threw the ball as required, with velocity and low.

Ponder also showed that Joe Webb isn’t the only quarterback on the roster who can make something happen with his feet.

Christian Ponder has demonstrated that he’s very good at finding receivers and very accurate at delivering the ball to them on roll outs and now he’s demonstrated defenses need to take into account his ability to run with the ball but what he hasn’t proven yet is his grace under pressure in the pocket nor his accuracy when he’s not on the run.

Ponder’s throw was short to Devin Aromashodu on a comeback route; a poorly-thrown and I’ll-advised pass to Rudolph fell incomplete; his touch pass between two defenders to an open six-foot-six Kyle Rudolph sailed high and would’ve been picked had his tight end not gotten a hand on it; Ponder stared down another receiver and nearly threw a pick-six; and another poorly-thrown ball was nearly picked off.

The great news for Vikings fans frustrated by the lack of progress of Tarvaris Jackson is that Ponder has definitely made progress even over the course of this abbreviated off/preseason. He’s definitely learning the game.

Joe Webb worked mostly from the pocket and was efficient, directing two scoring drives, both of which culminated in Caleb King touchdown runs.

Webb’s highlights included a nice bullet of a pass to Emmanuel Arceneaux in a tight window on a slant; a nice run converted on third and long; and his long toss to Stephen Burton down the left sideline was a thing of beauty, placed out in front of his receiver and toward the sideline where only Burton could get it, and should have, despite it being a tough play to make.

Again, I think Webb has earned the backup position but other factors are at play here such as the number of practice reps Ponder gets this season and getting Webb on the field during the regular season.

So you’re guess is as good as mine.

Running Backs: Maybe the Vikings coaches gave Caleb King too many touches last night. You gotta wonder if we’ll be able to sneak him on to the practice squad, given his 19 carries for 62 yards and two touchdowns.

The fact that the Vikings made a claim for former Lions fullback Jerome Felton tells you what the team thinks of their current players at the position.

My enthusiasm last year for Ryan D’Imperio was based largely on how gawd awful Nafahu Tahi was. Since I don’t have Tahi to kick around anymore, let me take a kick at D’Imperio: He’s done the same thing this preseason that used to drive me nuts about Tahi. As a lead blocker he’ll go through the hole, find a linebacker to block and promptly bounce right off him. He can’t seem to move the guy or drive block to clear the way for his running back.

Rookie Matt Asiata has not shown much more.

The team could very well go without a fullback this season, given Bill Musgrave‘s love of tight ends and how he utilizes them.

Receivers: Despite being the talk of camp, Jaymar Johnson has not done a lot during the preseason to match the pre-game chatter. He did have two catches last night but his strength has always been his return abilities and last night it was Cord Parks and Marcus Sherels who had the nice returns.

Is this the last we’ll seen of Jaymar? Have the Vikings seen enough of Emmanuel Arceneaux, Stephen Burton, and Juaquin Iglesias to want any of them to slip though waivers?

Defensive Line: With another strong performance, I think Adrian Awasom has made the team (though it should be noted that Awasom has three years experience on the guy he was going against) and though Fred Evans has been mediocre, he’s made the team for lack of depth at nose tackle.

Linebackers: The backup linebacking corps is as muddy as it was before last night’s game. While it was interesting to see Everson Griffen playing linebacker and fun to see him swat away a pass from a receiver, I don’t know that we could learn much from his performance last night.

Kenny Onatolu did not look like he’s recovered yet from the stress fracture in his foot and Larry Dean and Ross Homan are rookies. I would not be surprised if the Vikings tried to bring other linebackers in for workouts.

Corners: Marcus Sherels just keeps playing his way onto this team with another strong performance on D and on special teams. Rookie Brandon Burton always seemed to have tight coverage and made that outstanding interception where he played tight coverage, turned to locate the ball, exhibited excellent body control and timed his leap perfectly to make the pick.

Special Teams: Chris Kluwe continued his stellar play, pinning the Texans down at the one yard line with the help of an outstanding play by Eric Frampton to keep the ball from going into the end zone, and another pin-point accurate coffin corner (as Greg Coleman might put it) kick, putting the ball out at the three yard line.

We’ve heard talk all preseason about “Joe Webb Packages” and the presumption is that those packages would be mostly wild cat-type plays but what about special teams?

Last season, we saw what Webb can do as a kick returner with his speed but how about utilizing his leaping ability, too? If Gerald Sensabaugh can leap over a lineman to block a kick, surely Joe Webb can do so, too:

Can we stop with the Oh My Gawd What Crime It Is To Play The Fourth Preseason Game, already?

We hear every year from people who get paid to watch football games about what a burden it is to watch such sloppy contests.

I’m one of them, obviously. I expect sloppiness. That’s not what I’m looking for; I want to see what we’ve got in people who are likely only to see action on special teams but could very well be thrust into a starting role if injuries mount during the season.

So, please, get over it.