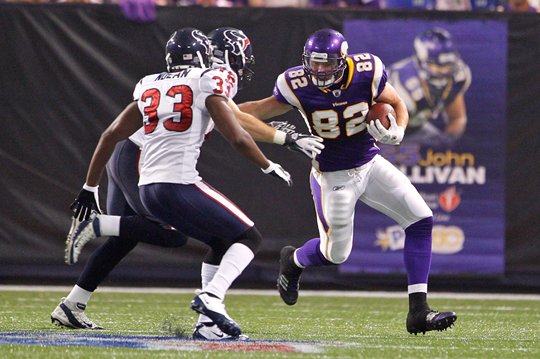 A new year, a new slate.

Anything can happen from season to season in the NFL and for that reason, I’m optimistic. A handful of plays can be the difference between wins and losses.

What seems like a tough schedule at the outset can turn out to be fairly soft; teams that look formidable can fall apart, look no further than the 2009-2010 Vikings for an example.

So, I have hope and here’s why:

Bill Musgrave: I am fascinated by the little we’ve seen of Musgrave’s offense during the preseason but I love what I’ve seen.

It bears emphasizing that this coaching staff’s philosophy is to fit the strengths of the players into the offense rather than forcing the offense onto the players, regardless of whether or not they can best execute it. That’s a profound culture shift from Brad Childress‘ philosophy, and a good shift.

There’s a clear emphasis on the tight ends in this offense and that probably has to do as much with the depth of talent we have at the position as it does with Musgrave’s bent.

The three-tight end sets we saw this preseason give the offense the flexibility to run or pass without necessarily tipping off the defense as to what you plan to do.

Having three tight ends on the field gives you more blocking options against eight and nine men in the box defenses and with Visanthe Shiancoe, Kyle Rudloph and even Jimmy Kleinsasser, you’ve got the talent to use them in the passing game as well.

It has been said that the emphasis on the short passing game is meant to protect an unproven offensive line with newcomer Charlie Johnson at left tackle and right guard Anthony Herrera returning from an ACL injury.

That may be true, but it is also likely to be best suited to our current crop of receivers. We know that Percy Harvin can break tackles after the catch, make defenders miss, and has the speed to take it to the house an any given play. Greg Camarillo is not going to stretch the field and Michael Jenkins is a big target who is likely best suited to the short passing game and the red zone offense.

It will be up to Bernard Berrian to stretch the field and make plays often enough to remind defenses they need to defend that.

We’re likely to see a lot more passes to the running backs in this offense, too.

Adrian Peterson: But, again, the Vikings have made it no secret that Musgrave’s offense will be run-first and Peterson looked very sharp this preseason. I think he’s going to tear it up this year.

Donovan McNabb: I admit I thought McNabb was washed up and I was impatient to get to the future with Christian Ponder. We’ve only seen him in the preseason so I guess McNabb could tank but he sure does look like he’s got plenty of play left in him.

He looks comfortable and in command of this offense. Having a veteran quarterback who has Pro Bowl appearances under his belt and has won in the playoffs and played in a Super Bowl command a run-first offense lead by Adrian Peterson while Ponder and Joe Webb sit and learn behind him is the best possible situation for the Vikings at this point.

Judging from the numerous shots of McNabb clowning around on the sidelines this preseason, it looks like he’s having a lot of fun on his new team. And that’s a very good thing for the Vikes.

Joe Webb: The wild card, or should I say wild cat?, on the offense. He starts the season as the number three quarterback but I’m not so sure the Vikings won’t flip-flop between him and Ponder throughout the season, depending upon what they need from game to game.

I am a big fan of Joe Webb simply because he’s a dynamic athlete and I’m very excited to see how he’ll be employed in this offense. The obvious role for him would be in a run/pass option wild cat package but I’d love to see what he can do as a wideout receiver. With his speed and the right matchups, I could see him lining up wide and just taking a quick pass from McNabb at the line and see what he can do with it. If he can track a ball over his shoulder, it would be fun to see him go deep.

I think this offense is going to be fun to watch this year.

XAVIER ADIBI HIGHLIGHTS
The Vikings claimed linebacker Xavier Adibi from the Houston Texans to serve as our backup middle linebacker. He’s fast, having run a 4.48 forty yard dash at the combine three years ago. We’ve got some of his college highlights at the site. [WATCH Xavier Adibi Video Highlights.]