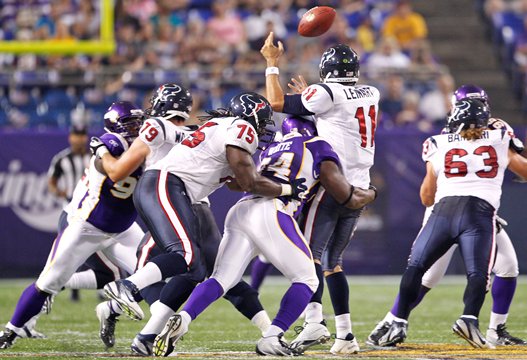 I take my 2011 Optimism Tour to the Vikings defense today and start with defensive coordinator Fred Pagac.

While the Vikings defense has been among the tops in the league from 2007 to 2010 when head coach Leslie Frazier was leading the unit, you wonder if or how much he was restricted by his head coach, Control Freak Brad Childress.

Frazier brings an open mind to player input–the genesis of which is superbly explained by ESPN.com’s Kevin Seifert–and presumably, along with that comes an openness to game planning.

I think we saw that play out last year against the Eagles, when Pagac brilliantly sent Antoine Winfield after quarterback Michael Vick on 19 blitzes. It was an “unscouted look” for which the Eagles were unprepared.

You are only capable of devising such defenses if you are not constrained by ideology, which Childress most assuredly was. Additionally, the openness to ideas bodes well for the Vikings when compared to the previous regime and it’s lack of imagination. That lack of imagination inhibited coaching staff from developing creative game plans that played to the team’s strengths and also, apparently, prevented them from imagining what opponents would do the the Vikings, as another piece by Seifert point out.

We know what Karl Dunbar can do with a defensive line and with the depth we have there, I’m excited about the potential there even in the face of Kevin Williams‘ two-game absence.

With the ascension of Erin Henderson to the weakside linebacking position, with the recent addition of backup middle linebacker Xavier Adibi, and with unproven depth, linebackers coach Mike Singletary will have his hands full. Still, he’s Mike Singletary, so you gotta like that.

The defensive coach who faces the biggest challenge, of course, is defensive backs coach Joe Woods. Ideally, the Vikings want Winfield, Cedric Griffin and Chris Cook to stay healthy all season as their base corners and hope that they play up to their potential. You know Winfield will, but the other two…well, we’ll see.

I am excited about Marcus Sherels and curious to see if he’ll take the dime position Sunday afternoon against the Chargers or if Asher Allen will be given that opportunity. Sherels just kept making plays during the preseason, so I’d really like to see what he can do when the games are for real because I thought Allen was in too deep last year.

At safety, well, let’s just say that Woods has his hands full there.

So that’s what I’m most optimistic about on the defense: The change of philosophy brought on by the change of regimes.