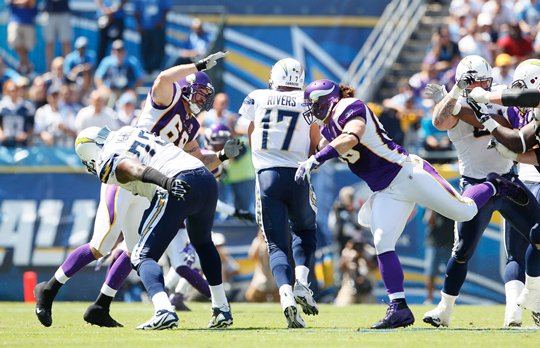 I was never that concerned about losing Ray Edwards because I don’t think he ever really showed up until the end of the season and I thought Brian Robison was a better pass rusher. With Jared Allen on the opposite side and Kevin Williams up the middle, I felt like Edwards didn’t take advantage of the attention teams paid to his linemates.

Robison got consistent pressure all game long on Phillip Rivers with spin moves and bull rushes the Chargers right tackle just could not handle. In addition to the great pressure, the half sack, and forcing an interception by swatting the ball as Rivers released it, Robison also sniffed out a screen for a loss.

Were it not for the play of Jared Allen, Robison might have had the best game of any defender.

But Jared Allen is Jared Allen. Earlier in the game, he dropped into coverage and then converged on Antonio Gates after he caught a short pass and laid a huge hit on the Chargers tight end with a perfect tackle, dropping him for no further gain. The following play he got to Rivers due to pressure from Robison and ended the play by sharing a sack with him.

Allen saved his best for last, however, with a play worthy of Alan Page. Picking up running back Ryan Matthews as he leaked out into the flat, Allen stayed with him step for step, turned to look for the ball as naturally as a veteran cornerback, plucked the ball from the air just as effortlessly, and turned to run upfield, practically all in one motion. It was an extraordinarily athletic play.

Remi Ayodele did a decent job plugging holes as a run defender but the defensive tackle duo of Fred Evans and LeTroy Guion were mostly invisible, except when it comes to jumping offsides at critical points in a game, at which they both excel.

Fred Evans’ highlight was the casual way he pushed over the Chargers’ center after the center flinched, causing an offsides.

Christian Ballard, on the other hand, looks like he’s pushing for more playing time because he was able to get some pressure up the middle during his snaps.

With Vikings having the luxury of Allen and Robison coming off the edge, getting pressure up the middle will make the linebackers and secondary’s job all the easier and make the Vikings defense as a whole all the more formidable.

Sunday’s game highlighted how much we miss Kevin Williams.

Chad Greenway got lost in traffic on Mike Tolbert‘s first touchdown and E.J. Henderson stepped up to keep Phillip Rivers from running, creating room for Tolbert to make the catch and score his third touchdown. Aside from those two notable miscues, the two played well, including a nice breakup by E.J. of a pass to Antonio Gates.

Erin Henderson got blown up on a block by Tolbert on the Chargers’ first run but he also got a sack while getting double-teamed on a blitz, so that was nice.

Who would’ve thought that the Vikings weakness in the secondary would be tackling? Even Antoine Winfield got in on the act with a couple of whiffs.

At least it is encouraging that Cedric Griffen, Chris Cook and Husain Abdullah did a pretty good job covering some tough receivers in Vincent Jackson, Malcolm Floyd and Antonio Gates.

The Chargers twice tried to match up Floyd with Cook but both times Cook was in great position to defend and Floyd didn’t have a chance at the ball. Though Cook had two penalties, one probably should not have been called on an uncatchable pass. Chris Cook still needs to prove himself as a tackler and he didn’t do himself any favors Sunday. On one screen play, he couldn’t get under the blocker to make a shoestring tackle a la one Antoine Winfield and on Ryan Matthews‘ long run both Cook and Winfield missed tackles.

The biggest test for Cedric Griffin was merely holding up for an entire game, which he did just fine, thank you, and threw in an outstanding play to sweeten the deal when he knocked a jump ball away from the six foot five Malcolm Floyd on a third down play. The penalty Griffin drew late in the game on the Chargers winning drive was a bit bogus, I thought. Griffen started the tackle a yard or two from the sidelines, so it wasn’t a late hit out of bounds or anything.

Though Winfield uncharacteristically missed several tackles, he did get an easy pick on Robison’s deflection and should’ve had another on an overthrown ball by Rivers in the end zone on fourth down. The fact that Winfield dropped that one is probably for the best because we likely got better field position as a result but you still want to see him catch that ball, cause our secondary has a problem holding onto interceptions.

Husain Abdullah had, but for one play, a very good game. On the overthrown long bomb to Vincent Jackson, Abdullah did not provide help over the top to Cedric Griffin and had the ball been better thrown or if Jackson had been a half-step quicker, it likely would’ve been a Chargers touchdown.

Nevertheless, Abdullah did a great job in coverage of Gates, stripping the ball from him on what would otherwise have been a touchdown.

At the other safety position, Tyrell Johnson made a shoestring tackle of Ryan Mattews in the open field but he appeared to be out of position on the play and we all saw Jamarca Sanford get crushed by Mike Tolbert on his way to the end zone, so that was a little embarrassing for him.

What killed the Vikings was the poor tackling and the slooooooww response to the dump-off passes in the flat, those running backs had a lot of green in front of them as they turned upfield.

But poor tackling is uncharacteristic of the Vikings D and the response to the passes in the flat presumably can be fixed fairly easily.

All things considered, I thought the Vikings defense did a hell of a job keeping San Diego to only 24 points while getting next to no help from an offense that couldn’t sustain drives.

When you start off the game with a 103 yard kickoff return for a touchdown, you can usually call your special teams play a success right then and there.

That return by Percy Harvin to start the game was a thing of beauty but it was a superb block by Toby Gerhart that made it possible.

Chris Kluwe was great, as usual, launching a 53 yarder at one point.

Marcus Sherels nearly broke a punt return during which Everson Griffen had two great blocks. Griffen provided great punt coverage earlier in the game and then returned a kick later, directing his blockers like he meant to break one.

The only special teams miscue was a missed tackle by Devin Aromashodu that would have pinned the Chargers deep.