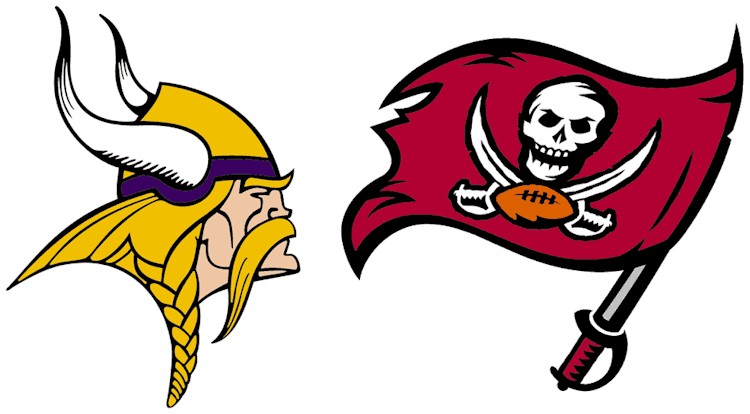 After last week’s tough loss to the San Diego Chargers, the Vikings have some things to work on for their first home game of the 2011 season, namely pass protection and stretching the field on offense, and tackling on defense.

While offensive coordinator Bill Musgrave acknowledged the team needs to stretch the field more than they did last week–like, more than once a game–that desire will not obscure the fact that his offense is built around Adrian Peterson and it is still a run-first team. The idea has always been to run in order to set up the pass, we just didn’t really bother with the second part of that equation last week.

But the Vikings and Peterson could find a lot of success up the middle against the Buccaneers. The Bucs are starting two defensive tackles who were rookies last year. Granted, they were high-profile rookies–Gerald McCoy with their first pick and Brian Price in the second round–but young players nonetheless. Price will be making his first NFL start Sunday and he’s returning from off-season surgery to reattach his hamstrings. Price told the St. Petersburg Times that he’s at about 60-65% strength.

Behind those tackles, middle linebacker Mason Foster is a rookie and outside linebackers Quincy Black and Geno Hayes are coming off such poor performances Tampa Bay head coach Raheem Morris felt compelled to call them out on it.

I would expect, then, that the Vikings again focus on getting Peterson the ball plenty but I’d also expect a much bigger role for the Vikings tight ends on Sunday and a healthy dose of play-action passes to try and stretch the field. That stretching will be done with Bernard Berrian but I’d more likely look to Visanthe Shiancoe and Kyle Rudolph to get some long passes down the seam, given the poor play last week of the Bucs linebackers.

The Bucs have veteran Ronde Barber at one corner and the talented by vulnerable Aqib Talib at the other. Talib had a pick-six last week but he takes risks, so look for the Vikings to try and get him isolated and have Donovan McNabb try and get him to bite on an out-and-up or stop-and-go pump fake.

It is, however, obvious to the entire world that the Vikings want to improve on their paltry passing performance last week, so the Buccaneers will be definitely try and frustrate McNabb by trying to shut that down.

On defense, the Vikings will need to first stop the run, as always.

In order to do so this week, however, they’ll definitely need to improve their tackling because the Bucs tailback, LeGarrette Blount, is a six foot, 247 pound back who specializes in breaking tackles. If E.J. Henderson can’t go due to the swelling in his knee, that could prove an especially big challenge.

But the Vikings could be aided by an offensive line that is way overpaid because they’ve way underperformed. If the Vikings can dominate the line of scrimmage on defense, shut down the run game, then they should have the advantage because left tackle Donald Penn (a former Vikings practice squad player) will have to go against Jared Allen and we saw the type of pressure Brian Robison can bring last week.

While Josh Freeman is a talented up-and-coming quarterback, he is still young, so getting in his face and making him uncomfortable in the pocket will help with forcing him into mistakes. But at six foot six, 248 pounds, Freeman is Daunte Culpepper-like in size and he can run, so when the Vikings defensive linemen have the opportunity, they’ll need to make sure to wrap him up and hold on to wait for help to arrive. He’s a large enough man that he can shrug off individual tacklers.

The Bucs have some talented receivers with Mike Williams coming off a successful rookie season, Arrelious Benn, and tight end Kellen Winslow Jr. But based on last week’s game, I’m less concerned about them than I am about the Vikings’ tackling.

On special teams, the major question is how many kicks Percy Harvin will be allowed to return.

The wild card for this game is how the team reacts to last Sunday’s loss. Will the coaches be able to shore up the team’s discipline (nine penalties last week and a bunch of missed tackles)? Will Musgrave have an offensive game plan that actually includes the forward pass?

The Vikings host the Tampa Bay Buccaneers at Mall of America Field on Sunday. Kickoff is at 12 CST and the game will be broadcast on FOX.

Your play-by-play guy will be Dick Stockton and John Lynch will be your analyst with no-one, thank God, serving as the sideline “reporter.”

Vikings: X-rays on E.J. Henderson‘s knee showed no damage but he’s had swelling that kept him out of practice Thursday.

We got your back, as usual. All the links you’ll need to scout out this week’s Hated Opponent can be found at Minnesota Vikings Chat’s Tampa Bay Buccaneers News page. I’ve also got video highlights of the Buccaneers loss to the Detroit Lions last week. [WATCH.]