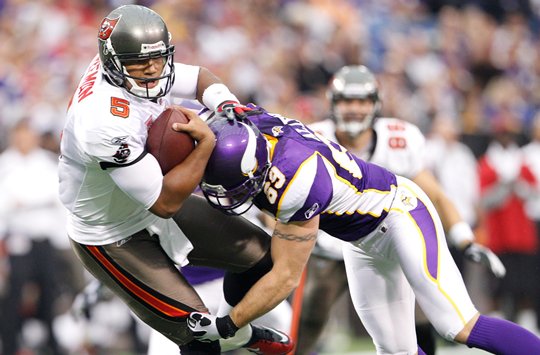 This is the same exact story as last week: Get off to a fast start, dominate your opponent in the first half, then blow a 17 point halftime lead to lose the game.

While the Vikings looked better this week than they did last, it was still a matter of being able to respond to what your opponent is doing to you and for the second week in a row, the Vikings did not.

The defense came out on fire with LeTroy Guion getting pressure up the middle that allowed Jared Allen to record a sack. Antoine Winfield and Remi Ayodele combined to stop LeGarrette Blount for no gain and Chad Greenway made a perfect tackle on a dump pass to Ernest Graham to force a three and out.

The Vikings offense started with a play action pass to Micheal Jenkins for sixteen and two Adrian Peterson runs of eleven and ten yards, respectively, but then Bernard Berrian dropped a pass and couldn’t separate from Aqib Talib on a long fly route and a blitz forced an early throw to Visanthe Shiancoe down the seam for a third down incompletion.

The drive stalled but the Vikings demonstrated they could move the ball in chunks of yards by blending runs and play action passes effectively. That was the offensive recipe for a dominant first half as the Vikings accumulated 17 points while the defense shut out the Bucs offense.

But in the second half, the Vikings could execute only one long, time-consuming drive and that one ended with a field goal instead of a touchdown. Adrian Peterson rushed for 120 yards on the day but 83 of them he gained in the first half.

Conversely, LeGarrette Blount gained 71 yards but only four of those yards were earned in the first half.

For the second week in a row, it was a tale of two halves.

What that tells me is the Vikings came into the game with a good game plan for each team but failed to adjust that game plan to account for the changes their opponents made in the second half.

There are two important aspects to game plans: 1) The players and 2) the coaches.

But you also create a game plan for your opponents coaches, you try and understand their tendencies, how they react in certain situations in order to anticipate those move but perhaps most importantly, how they react to what you’re team is doing.

Good coaches are empathetic coaches. They’re able to put themselves in the head of the opposing coaches in order to try and figure out how they will respond to your success. That’s where the successful adjustments and counter adjustments come from.

So far, I don’t see many adjustments from the Vikings coaches.

Of course, it helps when your players execute plays properly, have the discipline to not commit penalties, and play smart football.