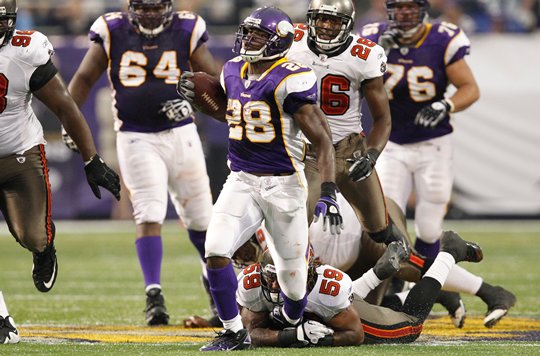 I don’t think anyone expected the start of the season to be easy for the Vikings. We started off the season with a trip to San Diego to face off against a playoff-caliber team and then came home to host a Tampa Bay team that is on the rise and which features a quarterback in Josh Freeman who clearly has the essential ability to come through when it matters most.

And for as many veterans as there are on this Vikings team, they’re awfully new: New coaches, new schemes, new quarterback…a lot of moving parts that didn’t have much of a chance to work in harmony during a lockout-shortened offseason.

Statistically, 0-2 is daunting but such a start is not insurmountable. While dual second-half collapses will make you tear your hair out, there are also reasons to think they can turn this thing around.

Kick-Ass Offense: We’ve seen that Bill Musgrave‘s offense can be pretty kick-ass when he takes care to not become predictable. We saw a great performance during the first half of the season-opener, despite Donovan McNabb‘s lack of production through the air, only to watch them fail to adjust to the Chargers and get shut down in the second half.

But upon further review of the tape from the loss to the Bucs, the Vikings offense was pretty kick-ass for most of the game. When Adrian Peterson runs for 120 yards and two touchdowns, you’re doing something right. The unit we were most concerned about prior to the season was the offensive line but it did, by and large, a very good job. The thing is, in the run game, with Peterson carrying the rock, you don’t necessarily have to be a really good line, just good enough.

John Sullivan still can blown up occasionally and will get backed up into the quarterback on bull rushes in pass protection, but he’s improved overall, especially as a run blocker. While his lack of size can be a liability in the trenches, it is certainly an asset when he’s asked to pull or get downfield, as he showed with a great block during Toby Gerhart‘s 42 yard screen play Sunday.

Charlie Johnson and Phil Loadholt still struggle in both pass protection and in the run game but, you know, 120 yards is 120 yards.

The Vikings offense as a whole was playing well into the fourth quarter against the Bucs–and I thought the playcalling was particularly good–but it wasn’t enough, obviously. If you’re going to be a run-team predicated on long, time-consuming drives, you need to come away with points at the end of those drives more often than not.

That, in a nutshell, is this offense’s major malfunction.

What do you do with that? Send Percy Harvin deep more often? That’s the most immediate answer but as talented as he is, at 5’11”, 184 lbs., he’s on the smaller side for a wideout. It seems obvious that McNabb is most comfortable with Michael Jenkins as a receiver and at 6’4″, 214 lbs., he’s got some height and bulk on defenders. Can we see what he could do deep?

The big elephant in the room, though, I think is Joe Webb. He might be the fastest guy on the team and he is one of the Vikings best athletes. At 6’4″, 220 lbs., he’s got the dimensions to be a good wideout, but the only question is if he has the soft hands and ability to track the ball required to be a receiver. If you just send him on fly routes, he’s likely going to be able to get a step of three on defenders, so can he find and catch the ball over his shoulder?

Were you to go that route, though, you’d need to get him much more involved in the offense than in merely wild cat packages, so it wouldn’t become predictable as to what role he would play.

Defense: If you want to talk collapses, let’s talk defense. In both games, the defense did a hell of a job shutting down their opponent in the first half, only to react slowly and unlearn how to tackle in the second half.

Despite another stellar performance by Jared Allen and consistent pressure by Brian Robison off the edges, the Vikings defense found a way to get beat for the second week in a row. The formula was similar to last week: Get the running game going to slow the Vikings rush down and pass off of that. The Chargers used dump off passes in the flats to which the Vikes were slow to react, while the Bucs employed play-action passes for which the Vikings D had no answer.

Game Of Inches: It is true that football is a game of inches and that concept was illustrated a few of times last Sunday.

But for a couple of shoestring tackles of Adrian Peterson, the Vikings might be 1-1.

But for an offsides penalty by Brian Robison, the Vikings might be 1-1. And by the way, it is debatable that Robison was actually offsides on that play. Analyst John Lynch expressed his doubts at the time, so I went back and looked.

I mean I really looked.

I rewound and rewatched that thing like the Zapruder film and it appears that Robison timed his rush so perfectly that while he was out of his three-point stance before the ball was snapped, he was not actually over the line of scrimmage before it was snapped. Robison was coming out of his stance as the ball was snapped but because he was so quick, it appeared to the line judge he was offsides. Vikings Hall of Fame defensive tackle Alan Page used to get called offsides all the time when he wasn’t because he was so quick off the ball.

But for safety Tyrell Johnson‘s dropped interception (again) on the Bucs game-winning drive, the Vikings might be 1-1.

The thing is, while we have our weaknesses, there is nothing really fundamentally wrong with this team that can’t get fixed. It’s just a matter of if it get’s fixed in time.

Vikings: Cornerback Chris Cook is nursing a groin strain but will be evaluated at practice today to see if he can go on Sunday. Ugh. Is this guy fragile?

We got your back, as usual. All the links you’ll need to scout out this week’s Hated Opponent can be found at Minnesota Vikings Chat’s Detroit Lions News page.

There are also video highlights of the Lions season-opening victory over the Bucs and last week’s demolition of the Chiefs. [WATCH the Detroit Lions Video Highlights.]