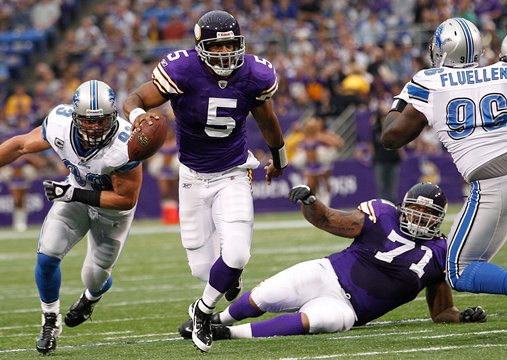 The Star Tribune writers are all-in on the idea of benching Donovan McNabb in favor of Christian Ponder. Jim Souhan was the first to declare it’s time to start Ponder.

There’s a sure-fire formula for wrecking young quarterbacks: Make them play behind an offensive line that at best can’t give them extra time to find open receivers and at worst, can’t keep them from getting pounded into the ground by salivating defensive lineman. Right now, the Vikings pass protection is of the At Worst variety.

Last Sunday, Charlie Johnson and Phil Loadholt consistently struggled to keep their guys off McNabb, Anthony Herrera had a tough assignment against Ndamukong Suh and understandably lost some battles, and John Sullivan apparently has yet to master the shotgun snap.

And you want to put Ponder behind that?

I’m not saying McNabb is all that. Too often, he’s breaking his receivers’ stride by throwing too low or behind (just ask Percy Harvin, Jimmy Kleinsasser and Kyle Rudolph), and Sunday he overthrew Bernad Berrian when our deep threat actually had a step on his defender for what would’ve been a touchdown.

The Vikings coaches say they’re going to take a look at McNabb’s mechanics to see if there’s something they can do to improve his accuracy, citing the bounced passes. I got news for them: McNabb has been throwing passes at his receivers feet since his Philadelphia days. That ain’t nothin’ new.

But it’s not all McNabb’s fault, either.

In addition to the constant collapsing pocket he has to deal with, his receivers aren’t helping him out a great deal, either. We’ve discussed Berrian’s refusal to fight for close balls.

But last Sunday, Percy Harvin, the receiver everyone agrees is under-utilized, dropped at least two passes that hit him right in the hands, one on a screen that looked like it could’ve gone for a touchdown.

On the opening drive, Adrian Peterson also dropped an easy screen pass that also looked like he could’ve taken to the house.

Instead, we settled for a field goal.

While I don’t think the Vikings should play Ponder while the offensive line remains as shaky as it is, it is certainly possible it will improve over the course of the season. It’s also possible the Vikings coaches might believe Ponder could handle the pressure. But three games into the season seems too soon.

It’s hard to read the tea leaves with regard to the quarterback position, though.

Coach Leslie Frazier talked up going into the season with Ponder as the presumed starter but then went out and got McNabb when the lockout robbed Ponder of the offseason preparation time he needed. Now he’s talking about taking a look at McNabb’s mechanics while conceding that he thinks Ponder is ready to play.

I just hope they don’t throw Ponder to the wolves before he can handle it. I’d be fine letting McNabb take the punishment this offensive line allows through for a while.