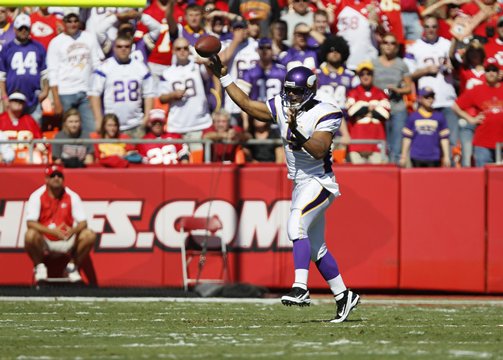 One way or another, quarterback Donovan McNabb is not long for the Minnesota Vikings roster.

He signed a one-year contract and the Vikings drafted their franchise quarterback in Christian Ponder, so whether it is against the Arizona Cardinals or the following week or next year, Vikings fans clamoring for a change at quarterback will get their wish.

While I’ve been pretty adamant about not starting Ponder before he’s ready, the only people who really know when that will be true are Leslie Frazier and his coaching staff. Further, the decision to bench McNabb in favor of Ponder goes beyond simple ability to lead the offense to considerations about how such a move would affect the locker room as well as stadium politics.

It would be a tough decision to make for any coach, let alone a rookie.

But given the inevitable (at some point) change of quarterbacks, it’s fair to take a look now at what McNabb gives us versus what Ponder might provide while the first round draft pick bides his time.

The biggest issue with McNabb thus far this season I think has been his inaccuracy. Sunday was a case in point. You remember how I used to go on and on about Tarvaris Jackson‘s inability to throw an accurate deep ball?

Well, despite the perfect ball McNabb dropped into the hands of Devin Aromashodu for the 34 yard touchdown, McNabb missed in a way we’ve seen him miss before on the long ball. Two balls down the field, one to Bernard “Careful With That Tweet” Berrian and the other to Percy Harvin, drifted out of bounds, giving his receivers no chance to make a play on the ball.

On one third down play, McNabb had Harvin running a drag route with a linebacker trailing him that had Donovan lead Percy, would have surely resulted in a first down conversion but the pass was thrown behind Harvin and the play failed. The pocket was not collapsing on McNabb and there were no linemen in his his face obstructing the play, it was just a bad pass.

As was the screen pass he threw too high to Toby Gerhart that resulted in an interception.

On the Vikings final drive, McNabb had two passes batted down at the line and threw another pass that hit the dirt in front of Berrian’s feet. While he was under duress on that throw, the skipping the ball short of his receiver is a pass that has plagued McNabb throughout his career. I don’t know whether the same is true for the batted passes but it is something we’ve seen before from McNabb as a Viking in the preseason and as his first regular season throw in purple, which resulted in an interception.

McNabb is more dangerous on the run but as an older quarterback he’s less capable of beating you that way than he used to be and defenses can gameplan to keep him in the pocket, where he’s less accurate.

As a veteran quarterback with one Super Bowl appearance, numerous playoff games under his belt, and several Pro Bowl appearances, he’s got the experience and savvy that teammates respect. He’s also got the knowledge of the game to recognize what defenses are doing and call corrections at the line to counter them.

That experience and knowledge of the game allows a quarterback to keep his head about him when everything seems to be falling apart: Grace under pressure, Hemingway would’ve called it.

Yet at the same time, we’re 0-4 under McNabb. That record is certainly not entirely his fault but he must share some of the blame. Winning quarterbacks have intangibles, and I’ve listed some of them, but one of the biggest is the ability to rally your team to victory be it in the form of holding onto a lead or coming from behind.

McNabb has done neither.

The question is whether Christian Ponder can do any of this.

We do know he’s more accurate outside the pocket…and not too accurate inside it. Which means NFL defenses will try to contain him and force him to beat them as a pocket passer.

We do know he’s got some mobility and this is perhaps the most plausible area where he might outshine McNabb in his ability to either earn more time to make something happen in the passing game or to take off and gain some ground on a run. We’ve seen that McNabb can still do that, it’s just that Ponder would likely do it more often and therefore change the dynamic of what opposing defenses need to account for.

As far as everything else with Ponder, we just don’t know.

Nor will we until Ponder starts taking snaps for real.