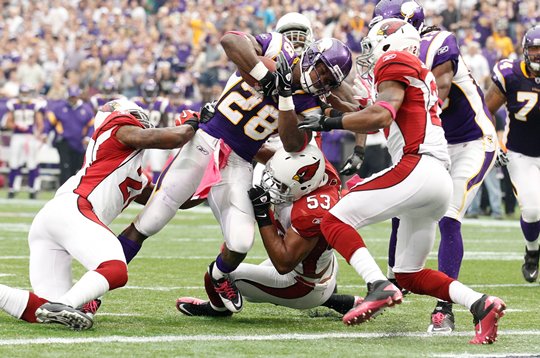 That was much more fun. But not entirely fun. Not four quarters of fun.

The Vikings explode for 28 first quarter points but by the second half you’re starting to feel that old familiar pit in your stomach and sense of dread as you feel momentum slipping away.

But 28 points proved too much for the 1-3 Cardinals, who could not capitalize on the many opportunities they had to seize control of the game. But as we know, that’s how losing teams do: They fail to take advantage of their advantages.

The storyline on Adrian Peterson going into the game was that he had decided to become much more of a team leader. While Leslie Fraizer emphasized Peterson’s insistence on rallying the offensive line on the sidelines during the game, Peterson’s example of leadership was best showcased on the field, where he dominated the Cardinals for 86 first half yards and three touchdowns.

Poor Patrick Peterson. Adrian made a fool out of him on all three touchdowns, breaking his ankles on the first, pounding him at the one yard line with a shoulder on the second, and simply plowing through him on the third.

Peterson finished with 122 yards on 29 touches, carrying the load for his offense. His longest run was the touchdown dash of 24 yards but he might’ve had an even more monstrous game had some runs not been saved by shoestring tackles.

Speaking of those: Does anyone keep track of shoestring tackles? Cause it would be interesting to know. Cause I think Peterson has been stopped by a lot of them this season.

It was pretty much All Adrian, All The Time, which is as good a recipe as the Vikings are likely to muster with Donovan McNabb demonstrating game after game that he is deteriorating quickly as a quality passer.

On a day in which Lorenzo Booker contributed more on offense than Percy Harvin (how does that happen?), the only other story on offense was the ascension of Devin Aromashodu on the depth chart with Bernard Berrian getting benched for unspecified disciplinary reasons.

I would hope that I’ll need to finally learn how to spell Aromashodu because this move should be permanent.

Aromashodu had two catches, one of which was a catch and run that went for sixty yards. One thing we learned yesterday was just how fast Devin Aromashodu is and apparently it is not fast enough to outrun the final defender to the end zone.

Still, I’ll take his production over Berrian’s any day.

On defense, it was once again the Jared Allen/Brian Robison show. While Jared Allen is on a pace to break Chris Doleman‘s record of 21 sacks in a season (Allen’s at nine through five games), Brian Robison is taking full advantage of playing opposite The Beast with five of his own sacks.

Granted, the duo were playing against mediocre tackles but they’ve been bringing it all season and have been the highlight of the 2011 defensive squad.

The secondary held up well given Antoine Winfield was inactive, holding Larry Fitzgerald, Jr. to four catches for 66 yards and Early Doucet to eight catches for 92 yards and no touchdowns.

Asher Allen played well, making a pick on a ball batted at the line and stopping Beanie Wells short of the first down on a crucial fourth and one play that could’ve changed the momentum of the game.

We continue to have problems down the seam, with Kevin Kolb missing on several opportunities, at least one of which would’ve easily been a touchdown.

The most important ingredient that contributed to the Vikings run of 28 first quarter points Sunday was the superb field position the offense was afforded. Credit that to the outstanding play of both punter Chris Kluwe and punt returner Marcus Sherels.

Let’s be realistic about this win. It bears repeating that the Cardinals were 1-3 going into this game and with the way the Vikings were hanging on in the second half again (they scored no touchdowns), it’s unlikely they could’ve won this game against the Bears or the Packers without more second half offensive production.

But a win is a win and it’s progress so let’s enjoy it while we have the opportunity.