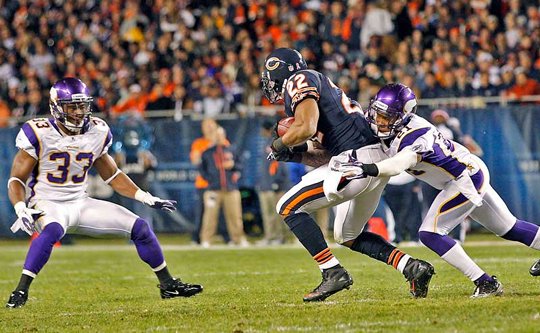 Everything…not to put too fine a point on it.

Not this one. This was a blowout from the start but rather than resigning ourselves to the blowout, it only adds to the frustration because it would appear the team has taken a huge step backward.

Okay, right, it’s just one game. Teams have those blowouts occasionally. But after last night’s performance, it’s difficult to imagine not seeing a repeat at home at the hands of the Green Bay Packers.

Defense: A Vikings pass rush that seemed unstoppable a week ago was handled all night with max protect and plenty of attention paid to Jared Allen. The one exception, glaring by comparison with the rest, was Allen’s sack, strip and fumble recovery of Jay Cutler.

While I can’t blame Cedric Griffin for his failure to keep up with Devin Hester–few people can–it is notable that he is getting picked on this year instead of Chris Cook, who suffered the indignity of being considered the weak link last year.

Even though Griffin did get help over the top on Hester’s touchdown catch, the definition of “help” must be interpreted broadly in this case, as in Husain Abdullah was near the ball. Abdullah was in position to make an easy pick if he’d turned to look at the ball in time.

The Vikings could have used Antione Winfield badly last night because there were plenty of missed and broken tackles and that allowed the Bears to get Matt Forte going in the running game.

And that allowed the Bears play-action passes to be effective.

And that subverted the Vikings pass defense even further.

Another week passes and the Vikings defense fails to take advantage of the opportunities presented to them.

Husain Abdullah failed to maintain control of a fumble recovery as he rolled out of bounds. Tyrell Johnson dropped another pick (the only surprise there is that he was on the field), as did E.J. Henderson.

Speaking of E.J.: I love the guy as a run defender but he’s a liability in coverage; he’s not fast enough to get a deep enough drop to disrupt the passes down the middle.

Offense: On the Vikings first series, they faced eight and nine men crowding the line of scrimmage and produced a one yard run by Adrian Peterson followed by a two yard run by Adrian Peterson followed by another Donovan McNabb pass that was tipped at the line on a quick throw down the line of scrimmage to a receiver. This time, though, a cornerback blitzed and McNabb nearly threw him a pick six.

The Bears showed no respect at all for McNabb’s ability to beat them deep. And for good reason: He hasn’t shown he can all season long.

How does it work that on a day in which the notoriously inaccurate McNabb completes 79% of his passes, he still manages to look awful?

So, with no hope for a win, Leslie Frazier benched McNabb and gave fans a glimpse of McNabb’s heir apparent, Christian Ponder.

And there was plenty to like in the first two series of Ponder’s NFL career. After handing off to Peterson, Ponder ran effortlessly for a first down; he showed the ability to escape pressure in the pocket, the quickness McNabb no longer has to escape chasing defensive linemen, the accuracy McNabb never really had, and poise that makes you think he might be ready to take the reigns. He threw some darts into tight coverage for completions and, because of his ability to accurately fit the ball into a tight window, defeated an early attempt by Brian Urlacher to bait him into a pick.

Special Teams: Anyone can get burned on a Devin Hester kick return, so we’ll give the Vikings a pass on that one. But Chris Kluwe, who I only half jokingly called The Franchise during the 2005 season, had the worst performance I can remember from him.

Coaching: The Vikings had no answer. To anything. Brutal.

Positives: I’ve already listed the positives for Christian Ponder. But aside from that? Percy Harvin looked great.