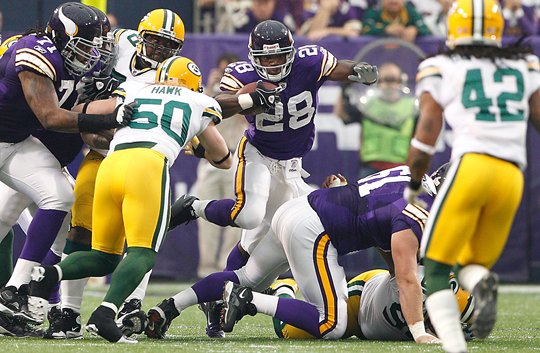 Some thoughts on the Vikings overall performance after focusing on Christian Ponder‘s first start yesterday, but of course, let me first add a few more Ponder items:

Christian Ponder: Watching the replays of Ponder’s first pass to Michael Jenkins, you’ll notice the pump-fake Ponder used as Jenkins was breaking out on his out-and-up route: It was a muscle-twitch rather than a full-on pump, but it was enough to get the attention of the defender, timed as it was at the breaking of the route.

On back-to-back passes in the first quarter, Ponder needed to put much more velocity on his throws that were nearly picked off by Jerrod Bush and Charles Woodson (even though Woodson hit Percy Harvin early on that play; the cheater), respectively.

On Woodson’s first pick, Ponder simply stared down Visanthe Shiancoe and shouldn’tve thrown the ball in the first place; on the second pick, Ponder needed to drop the ball behind Woodson and let Jenkins run it down instead of the bullet he did throw.

You could see both that Ponder had learned his lesson and that his third-quarter trial-by-fire had not rattled him when he challenged and beat Charles Woodson for a fourth-quarter touchdown to Michael Jenkins with a pass that only Jenkins could reach.

Ponder made a wise choice to throw at Lorenzo Booker‘s feet during one screen pass but later threw an ill-advised screen to Shiancoe that was high, tipped, and could very well have been intercepted.

Despite his opening pass, Ponder does seem to have some accuracy issues on the long ball, particularly on the one thrown inside to Michael Jenkins, giving Jerrod Bush the opportunity to get perfect positioning on the play. I’ll take the jump ball he threw to Devin Aromashodu that was well defended on most days, though.

Ponder showed his composure by handling less-than-stellar snaps by backup center Joe Berger, especially on two plays: When Berger snapped the ball early, Ponder had the presence of mind to take off running and turned a broken play into seven yards, but his handling of a high snap late in the game was most impressive, controlling the ball with his fingertips and then finding Greg Camarillo for a catch.

Adrian Peterson: Given the Vikings record, Adrian Peterson is having a hell of season…it just doesn’t seem that way. Until last Sunday. We’ve become spoiled with Peterson, expecting amazing runs game-in and game-out. AP has been on the verge of breaking long ones several times this season, only to be stopped by his shoestrings. But last Sunday we saw three runs that showcased his breathtaking talent.

While not elegant, I will say that Peterson’s pass protection appears to have improved quite a bit this season.

One thing that’s annoying me a little bit, though: Several times this season, and again last Sunday, when Peterson has a defensive back one-on-one in the open field, he’s tried to put a move on the guy only to be tackled. It seems to me, he’s simply giving the defender more time to make a play where he might be better served by simply running through the guy.

Run Blocking: The run blocking was pretty damn good against the Packers. You take a look at Peterson’s long gains and you’ll see some mighty fine blocking.

On the run AP bounced out for 29 yards on the first half, you saw a great lead block by fullback Ryan D’Imperio, a nice seal block by Shiancoe, another seal block by Phil Loadholt, Berger got to the second level to put a hit on A.J. Hawk and and Jenkins was downfield blocking on Woodson.

Tahi Who? You’ll remember from last season that one of my guilty pleasures was complaining about the abysmal play of alleged fullback Nafahu Tahi. Thankfully, linebacker-turned-fullback Ryan D’Imperio is living up to what I’d hoped he’d become: An actual fullback capable of blocking people. He certainly has room for improvement but when he blocks a guy, he doesn’t just bounce off him like Tahi did and it appears he can sustain his blocks for a little bit.

After one bad game? Pleeeeze.

On at least two of his whiffs he was up against Clay Matthews, a tough assignment even for a superstar blocker like Sass.

So let’s give him the rest of the season before we send him off to the knacker’s yard.

Defensive Line: While Jared Allen continues his record setting pace (enjoy this, because this season could be one for the ages for a pass rusher), and with Kevin Williams getting double-teamed, you’d think Brian Robison would make the highlight reel for something other than flagrant childish behavior.

And no matter who’s in there, it seems Williams is getting no help inside. I know he’s a run defender, but Remi Ayodele has been next to invisible this year.

On the plus side, though, whether it’s special teams or on defense, Everson Griffen always seems to be making plays. Against the Packers, Griffen’s persistence resulted in a sack of Aaron Rogers, he saved a touchdown on punt return coverage, tripped Randall Cobb up on an earlier return, and nearly blocked a kick.

Linebackers: Chad Greenway had an okay game and E.J. Henderson continues to look slow. He completely misplayed a run by James Starks in the first quarter and he couldn’t stay with Jermichael Finley on the tight end’s third quarter touchdown catch.

And that’s giving more and more opportunities for little brother Erin Henderson to step up. If this continues, we may be looking at Jasper Brinkley as the favorite for the middle next year.

Defensive Backs: While Marcus Sherels acquitted himself well on defense, he continues to make mistakes in the punt return game. He fielded one punt at the ten yard line, another at the five but redeemed himself by returning it to the twenty but then he let another punt bounce by that he should have fielded and then didn’t even have the common decency of blocking the defender to prevent him from downing it at the three.

In the second quarter, on a Green Bay screen pass, one of the announcers said, “Played well defensively by Tyrell Johnson.”

You don’t hear that every day.

Conversely, for the second game in a row, Husain Abdullah blew coverage and allowed a touchdown; this time he inexplicably let Greg Jennings go by him for an easy, uncontested 79 yard touchdown catch. Abdullah also missed a tackle on a pass to James Jones that allowed the receiver to pad his YAC stats.