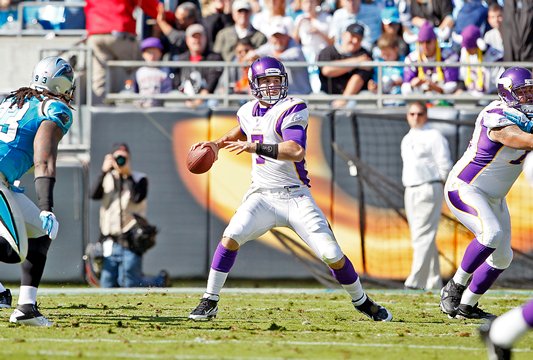 The Vikings are fun to watch again!

And it’s all because of Christian Ponder.

Take stock of your feelings in the second half of the past two games. Notice anything missing? That sinking feeling, maybe? That lurking dread of inevitable collapse?

And then yesterday, with less than a minute remaining and Cam Newton having just rushed six yards down the sideline for an apparent first down to set up either a go-ahead touchdown for the Panthers or at least a chip shot field goal to send the game into overtime, weren’t you thinking alright, let’s see what Ponder can do with 24 seconds?

With Ponder at quarterback, after only two games, you feel like we at least have a chance to win each game.

Sure, the Vikings needed help from Olindo Mare, but we’ll take it.

Ponder wasn’t spectacular–it was Newton who made amazing throws, particularly that touchdown to a blanketed Steve Smith–but Ponder showed a lot of improvement from last week, he kept the Vikings in the game till the end, didn’t make costly mistakes, and, at the end of the day, he was the first round rookie quarterback who came out on top.

Ponder completed 64.3% of his passes, one for a touchdown to Adrian Peterson on a perfectly executed screen, took four sacks but threw no interceptions.

Ponder’s most impressive drive might have been one that resulted in no points. During that drive, Ponder managed to get the ball handed off to Peterson while falling down, made something out of nothing on what appeared to be back-to-back broken plays, and overcame those difficulties to fire a shot to Harvin for a first down only to have his receiver cough up the ball in the red zone.

But the most impressive play of the day by our rookie quarterback has got to be the throw he made to Percy Harvin, who caught the ball, put a spin move on Chris Gamble, and plowed through a couple of defenders to convert a third down.

While Harvin is rightly getting credit for his amazing effort on the play, overlooked was the fact that Ponder read the blitz correctly, got the ball out quickly to his hot read and had to do so with two defenders in his passing lane.

I have feeling I’m going to be talking a lot about Ponder for the rest of the season but that’s all good.

I’ll have more thoughts on the rest of the team’s performance tomorrow.