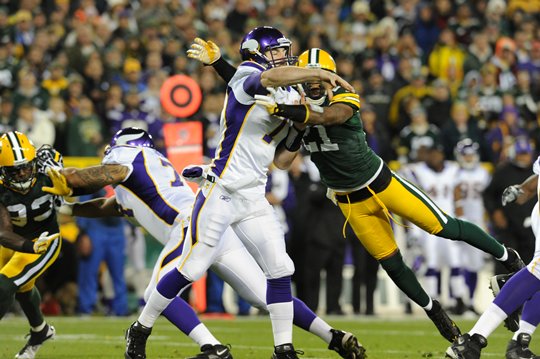 I’ve seen it from both sides of the ball.

There are times when you know you have not a chance in hell against the opponent you’re about to face. Personnelwise, they’re better than you are. They’re likely to execute far better than you will. All you can hope for is a lot of luck and a flawless performance by your team.

Going into a game with that attitude–and, let’s face it, that reality–sets a team up to bow to the inevitable futility at the first sign of adversity. Well, here we go, you think and wait for the game to end.

Conversely, I’ve played games where you look across the line of scrimmage and you can tell by your opponent’s mere affect that you’ve completely demoralized them. Either there’s no life in their eyes or they’re bickering amongst themselves. And it’s usually the guy who is getting toasted the mosted who is laying the thickest coat of blame on his teammates.

That’s the guy you continue to pick on because he’ll help you keep your opponent demoralized.

The Vikings we’re the demoralized team from the start last night. Yes, they were playing an undefeated reigning Super Bowl champion but that’s no excuse. They hung with the Packers two games ago, so why this game?

The mistake Leslie Frazier and the Vikings made from the start was failing to manage expectations by claiming we were not in a rebuilding year at the start of the season. Any time you have a new coach taking over from a coach who was fired due to a losing season, you are almost by definition going to have a rebuilding year.

And a good rule of thumb when you hire a new coach is that it’s going to take three years to return to success.

The Vikings will have a lot of opportunity to judge the quality of the young players on their roster because they have the toughest remaining schedule in the NFL this year.

So much for parity.