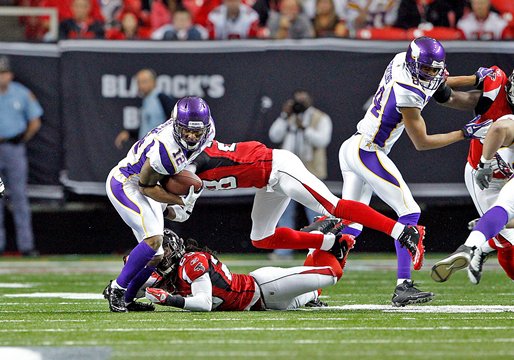 My first impressions after the loss to the Falcons and without having had a chance to review the tape:

Christian Ponder: This was Ponder’s best loss to date; it would’ve been his best game had the Vikings won. His best game by that definition was the victory over Carolina.

Statistically, Ponder had a quarterback rating of 103.1 and enjoyed the highest accuracy, completing 68% of his passes. He threw for one touchdown and did not give up a pick, but one interception was dropped and it likely would’ve gone for a touchdown. So there’s that.

But I think he’s doing a very good job considering 1) he’s a rookie, 2) he has little to no protection and 3) his receivers can rarely get separation.

After spending the first half flailing about like a turtle on its back, the Vikings came alive in the second half to make a game of it. The defense stepped up and forced three and outs and Ponder led his team to two scoring drives.

Those drives included two big time throws by Ponder, both to Percy Harvin. One was a twenty yarder stuck between two defenders that Harvin came down with at the one yard line to set up Toby Gerhart‘s touchdown plunge. The other was the 39 yard strike to Harvin in the back of the end zone.

We do have ourselves a quarterback but he desperately needs some supporting help from the line and from his receivers.

Toby Gerhart‘s chance to shine resulted in 17 carries for 44 yards, one touchdown, and another two receptions for 19 yards. I hope he gets more chances next week because this performance did not enhance his trade value.

Gerhart is particularly brutal on short yardage situations. Yes, I know a lot depends upon the line (witness his one yard plunge for the touchdown) but he had four chances to convert on short yardage plays yesterday and was successful once.

We’ve seen him stuffed on short yardage plays more often than not. His problem is he can’t get low enough to get leverage when he drives his legs.

Percy Harvin can play some ball. But then we knew that. Harvin gained 210 yards yesterday via pass, rush and return and he scored once. I think we should keep him.

Donovan McNabb: Trade him. Trade him quickly to the Houston Texans, who are down to their third string, rookie quarterback. I’d be happy if we got a seventh rounder for him.

For as poorly as the Vikings defense played, it is amazing the game was as close as it was. We lost Asher Allen and Tyrell Johnson (not saying there’s much of a drop-off, but still) and even so, we held them to twenty-four points.

That’s pretty amazing, when you think about how depleted we are.