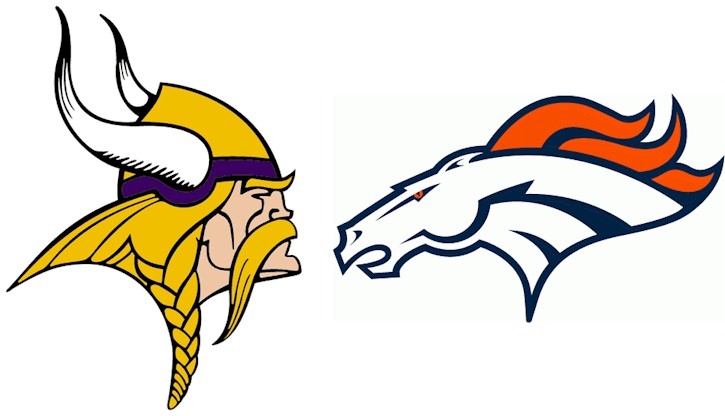 Tim Tebow: For the second game this season, I’ll be paying close attention to the opponent’s quarterback as well as our own.

But that, apparently, is all he can do.

Tebow’s passing accuracy is so horrible (and his running skills so good), that Denver has adopted a college read-option offense that maximizes Tebow’s running opportunities and minimizes the number of time he will throw the ball.

By leading a college offense that relies almost exclusively on the run–and aided heavily by a dominant defense–Tebow’s Broncos are on a four-game winning streak and are 5-1 since he replaced Kyle Orton as the Broncos QB.

Back in January when we were looking for a bridge quarterback to our Quarterback Of The Future, there was a lot of chatter among fans that the Vikes should trade for Tebow, since Broncos’ Executive VP John Elway was not enamored with the guy and therefore, Tebow was presumably available.

To which I said: Just Say No To Tebow.

I absolutely still feel that way, despite his current winning streak.

It is only a matter of time before NFL defensive coordinators figure this thing out and learn to shut down Tebow as a runner. When that happens, the guy’s going to have to learn how to 1) throw accurately (and by accurate, I mean within ten feet of the receiver) and 2) read NFL defensive coverages.

From what I’ve seen of his play, he’s a long way from anything but running the ball.

And yet, there’s a bizarre cult of personality surrounding this guy that goes beyond typical football fan devotion. Follow the comment threads on articles about him and you’ll find personal vitriol directed at anyone who is even slightly critical of the guy. The intensity of the devotion to him has more to do with his faith, I believe, than faith in his athletic ability. Read Pioneer Press writer Jeremy Fowler‘s superb piece about his experience covering Tebow to get a sense of the “Tebow phenomena.”

I feel for John Elway, who clearly does not believe Tebow is the answer at quarterback. The guy is a 236 pound fullback who takes snaps from the center; he’s not a quarterback.

I don’t know that I’d be too happy if I were a Broncos receiver and I don’t know how many free agent receivers are going to seriously consider Denver with Tebow entrenched at quarterback.

Here’s the other thing: Ideally, you expect your franchise quarterback to lead your franchise for 10, maybe 15 years, ultimately culminating in a Hall of Fame induction. But what is the shelf-life of a quarterback who averages 20 rushes per game? Even a 236 pound one? The average career of an NFL running back is 3-7 years; so that’s really what you’re looking at with Tebow. Hardly something you want to build a franchise around.

Elway’s got a public relations problem on his hands because any time he tries to manage fan expectations for Tebow, he’s met with withering criticism from Tebowiacs. If the Broncos keep winning, it’s going to be awfully tough for Elway to find a new quarterback, despite his better judgement.

I will give this to Tebow: Though I don’t think he’s a quarterback, he’s certainly a gamer and a leader. Four times he’s rallied his team for come-from-behind victories.

Though clearly I’ve not sipped of the Tebow Kool-Aid, that doesn’t mean I think the Vikings will beat the Broncos today.

Vikings Defense: The Vikings will need to play disciplined ball on defense today in order to defeat the Broncos read-option run defense.

The Vikings are ranked 9th against the run but whether that is due to opponents seeking the path of least resistance through a battered secondary is open for debate. There have been times the Vikes have been absolutely gashed on the ground.

If there were a game for Tebow to get some practice throwing the ball, this game is probably it, given that Asher Allen is out, Benny Sapp just rejoined the team, and rookie safety Mistral Raymond will start alongside Jamarca Sanford with Tyrell Johnson and Husain Abdullah going on IR last week.

On the other hand, if Denver sticks to their offensive modus operandi, the Vikings must steel against the run but will have to look for opportunities to pick off errant Tebow passes.

The thing is: He’s been pretty good at limiting those. The Vikings will have many more opportunities to create fumbles.

Vikings Offense: The Vikings caught a break because Rookie Of The Year candidate, Broncos linebacker Von Miller will not play; Miller has been a beast this year with 10 1/2 sacks but he’s coming off surgery to repair torn ligaments in his thumb, so he’s been ruled out.

You don’t realize how important your thumb is until something happens. I’ve had a jammed thumb for the past two and a half months. It hurts like hell with every catch, once you tend to jam it over and over again, so it takes forever to heal, and, most importantly, it drastically weakens your grip, making it harder to tackle (especially those ankle tackles linebackers often make shooting through gaps) and to hold onto balls you’re trying to pick.

Even without Miller, the Broncos have another pass rushing threat in Elvis Dumervil and Champ Bailey can still shut receivers down.

This could be brutal, even without Miller on the field.

The Vikings just put Michael Jenkins, their most productive receiver and one who clearly had rapport with Christian Ponder, on Injured Reserve, leaving a receiving corps of Percy Harvin, Devin Aromashodu, and Greg Camarillo.

Expect Bailey to match up against Harvin and the Broncos will take their chances with the rest.

With Adrian Peterson out, Toby Gerhart will again carry the ball but he’s coming off a performance last week in which he gained 44 yards on 17 carries for an average of 2.6 yards per carry.

The Vikings offensive line should shoulder plenty of the blame for that production but still, the Vikes traded up to pick Gerhart in the second round of the 2010 draft. It seems pretty clear the coaches don’t trust Lorenzo Booker to hold onto the ball, given the fact that was invisible last week.

The Vikings will get Anthony Herrera back at guard but that’s not going to be nearly enough for an offensive line that has been fairly disastrous most of the year.

That leaves the tight ends the likely target for most of Ponder’s passes but Kyle Rudolph is a bit banged up and Visanthe Shiancoe hasn’t really been all that this year.

All the Vikings need to do is score 24 points to have a decent chance of beating the Broncos. I’m just not that confident they’ll be able to do that.