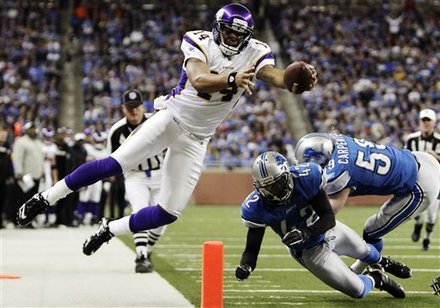 Joe Webb: At the end of last season I said I’d be perfectly fine with the Vikings going into 2011 with Joe Webb as their starting quarterback. Sunday reminded me why I like him so much. Lions head coach Jim Schwartz admitted his team had no answer to Webb. Webb’s 65 yard touchdown run was remarkable simply for how effortless it looked for him to outrun the entire Lions defense with room to spare.

I don’t know whether or not Joe Webb can develop into a starting quarterback but it would not surprise me at all if he can. He’s not going to get that chance with the Vikings, however, and I’m fine with that because I am sold on Christian Ponder, Sunday’s performance notwithstanding.

It should be clear, though, that Webb deserves much more playing time than he’s been given to date this season. Bill Musgrave‘s a creative guy. Find a way to put Ponder, Webb, Adrian Peterson and Percy Harvin in the same backfield and force defenses to pick their poison.

Musgrave should be as creative in getting the ball consistently in Webb’s hands as he has been doing the same for Percy.

Toby Gerhart: You know I’ve got my complaints about Toby Gerhart but over the past two games he’s demonstrating he can be an effective and punishing back when used properly. Ninety yards on 19 carries is pretty good for a back not named Peterson. That comes on the heels of last week’s performance against the Broncos in which he gained 91 yards on 21 carries. While I do like the idea of the one-two punch of Peterson/Gerhart, Toby might have more value to the Vikings at this point as trade bait.

Percy Harvin: Another game, another 156 all-purpose yards. The guy is simply amazing and it aches to speculate how good he could be with a legit deep threat opposite him.

Tight End Screen: That tight end screen to Visanthe Shiancoe that went for a touchdown was something to behold, all right. It was the perfect play call for the situation and it was executed to perfection. Absolutely beautiful.

Jared Allen: He’s back atop the leaderboard for sacks with 17.5 after notching three Sunday.

Never Say Die: Again, the Vikings were in it till the very end despite generously handing their opponent gift-wrapped mistake after mistake. It is encouraging to see that the team as a whole hasn’t given up even when there is no hope for nuthin’ this season.

The Score: They lost. So that’s one.

Christian Ponder: This was his toughest game not merely because of the many turnovers but because he’s made these mistakes before. It’s hard to put the blame for the opening fumble/touchdown on Ponder when Phil Loadholt‘s guy, Cliff Avril, came at Ponder practically untouched. Yeah, Christian could’ve stepped up in the pocket a bit but that turnover and touchdown should be squarely on Loadholt.

Ponder has only himself to blame for the other turnovers.

The third interception was to Eric Wright and was caused by Ponder throwing across his body, a mistake even rookies (and Brett Favre) should not commit.

Though that interception did not result in any points, remember that the Lions also dropped two interceptions thrown by Ponder.

All in all, it was a rough day during which he made some nice plays in between the bad decisions. This is just a bump in the road.

Lorenzo Booker: I was half right the last time I commented on Booker’s game. I speculated the coaches didn’t trust him to not fumble the ball. I was wrong about the coaches. Three carries; two fumbles; one lost that lead to a score. And we thought Adrian Peterson had a problem.

Devin Aromashodu: Plunk. Nice catch off the numbers, there, Dev. NOT.

Cedric Griffin: It’s tough hate on Cedric after what he’s gone through with his ACL injuries but it’s true that he’s a shadow of his former self. It is amazing he came back so quickly from his first ACL, let alone coming back from two. But those injuries are sort of akin to Tommy John surgeries in baseball; it usually takes two years to regain your previous form. It will be interesting to see where the Vikings go with Griffin after the season.

The Officials: Missing the blatant facemask on the final play, sealing the Vikings fate. [WATCH]

I would like to take a moment to applaud the Green Bay Packers organization both for their brilliant business acumen and for royally screwing their fans.

Which, of course, I’m all for.

The organization has sold 185,000 (thus far) pieces of paper to Green Bay Packers for $250 each sheet, but which cost the team a mere 3 cents a sheet to make. The pieces of paper are called “shares” yet the holder of said shares obtains only the right to own the sheet paper they paid $250 for.