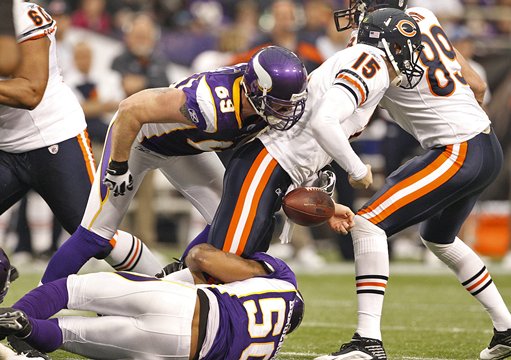 The 2011 Vikings Are Not The Worst Squad In History

THE SUCK FOR LUCK FOOLISHNESS

The Vikings didn’t suck enough for Luck, disappointing many of their misguided fans who were hoping they’d lay down in order to draft first. I guess I can’t blame fans for rooting for the Vikings not so much to lose but to improve their draft position.

I was hoping the Vikings would beat the Bears Sunday but I wasn’t disappointed they’ll draft third, either.

So, yeah, I get why fans would hope for the Vikings to lose some meaningless games but you’re just not thinking it through if you expect coach Leslie Frazier and his staff to try and lose. Losing is a habit you never want to acquire.

That would be setting about the worst example you possibly could set for a team and is hardly called leadership. A team needs to believe in their head coach and who can believe in someone who is actually trying to lose?

The drop in talent between the top three athletes in any given draft and the following three is usually pretty significant. Not that the Vikings wouldn’t get an elite player at best and a starter at worst if they’d beaten the Bears, but you’re almost guaranteed an elite player within the top three.

Nothing, of course, is 100% foolproof. By way of comparison, in 2005 the Vikings took wide receiver Troy Williamson with the seventh overall pick and in 2007 they took running back Adrian Peterson with the same draft position.

With the number three pick, we’re going to be at the top of the draft board across every round, so the 2012 draft will be much more important than usual to the team’s future.

The Colts and the Rams pick first and second, respectively, before us.

The Colts are expected to and would be stupid not to take Andrew Luck.

Given this likely scenario, however, if I were Leslie Frazier, I would heat up the rhetoric about competition at the quarterback position because the next most lusted after player for many teams would be Baylor quarterback Robert Griffin III. If the Vikings can create some doubt about how satisfied they are with Christian Webb at quarterback, they might be able to wrangle a trade for more picks. Likely suitors would include the Cleveland Browns, the Washington Redskins or maybe even the Tampa Bay Buccaneers.

A trade with Cleveland would give them the fourth pick and a trade with Washington would put the Vikings in the sixth slot still likely give them a shot at a position of need, either LSU cornerback Morris Claiborne, Iowa tackle Riley Reiff or Oklahoma State wide receiver Justin Blackmon.

Considering Frazier couldn’t even hide his desire to get Jimmy Kleinsasser a touchdown during his finale game, though, I wonder whether the coach is even capable of such Childress-esque deceit.

They sucked enough, though, to finish with the third overall pick but even with that abysmal season, even though they’ve tied with the 1984 Vikings for the worst ever, they weren’t the worst ever.

Most of the Vikings games have been close this year.

The Vikings never really had much of a chance to get Jimmy Kleinsasser in a position to score a touchdown in the final game of his career and that’s a damn shame.

Kleinsasser has been one of my favorite Vikings since he joined the team in 1999 because in addition to being a great guy, he was consistently the best blocker on the team. Watching him plow defenders around, game after game, has been a blast.

Yeah, blocking isn’t the most exciting part of the game but it is the most essential part of offense. For anyone who really loves the game, to see a player demonstrate such amazing skill so consistently for so long is a real pleasure.

Kleinsasser has been the Adrian Peterson of blocking.

If you enjoyed nothing else this season, you can at least walk away from a 3-13 season with the pleasure of having watched one of the finest seasons by a defensive end in NFL history.

The 22 sacks are the statistical testament to the remarkable season Allen has just completed but I think the best illustration of how he accomplished such a feat was when he was forced to take over long-snapping duties after Cullen Loeffler was injured.

Allen’s talent extended even to that position with the special teams unit not missing a beat due to the perfectly snapped balls Allen delivered and then being among the first down the field to tackle the return man. His devotion to being the best possible player at whatever position that is is why Allen just finished a record-setting season.

Savor it because it is highly unlikely he’ll be able to repeat such a season.

But never say never with this guy.