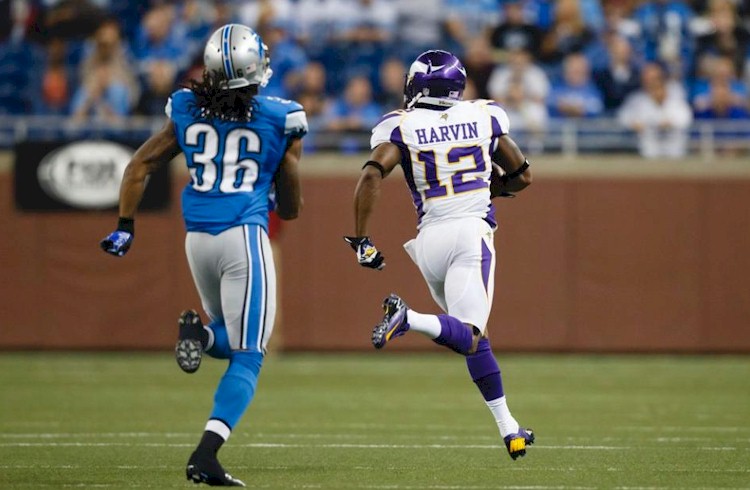 How To Quickly Demoralize An Opponent

Take the opening kickoff 105 yards untouched for a score…in their house.

Then, after they’ve clawed themselves back within striking distance of you by the half, return your first punt 77 yards for a score while breaking numerous tackles along the way.

Marcus Sherels‘ first punt return for a touchdown came on his 25th birthday.

The story warms my heart because I, too, had a punt return for a touchdown on my birthday. But that occurred on my fortieth birthday, so you could say it was a bit more impressive than that youngster Sherels’ return.

Of course, Sherels’ return came against an actual NFL team whereas mine came against a team composed of college kids and young professionals.  While Sherels was playing tackle football, I was playing touch. Where Sherels had to evade a six-foot-six, two hundred-plus pound guy running at him at full speed, the last guy I had to shake was tall but didn’t move his feet once.

So if you look at it from that perspective, you could say that Sherels’ return was a bit more impressive. But just a bit.

The number of touchdowns the Vikings offense scored during their 20-13 victory over the Lions.

While the Vikings offense had plenty of impressive drives on Sunday, only two resulted in points and the only points were three a piece.

Though we didn’t score a touchdown, the offense didn’t look broken or uninspired or lackadaisical or anything you’d expect given the failure to produce a touchdown.

…the Vikings reconfigured offensive line were good enough in their run-blocking to account for at least 100 yards rushing each game this season and paved the way for Adrian Peterson to top 100 yards for the first time on Sunday. While they gave up sacks to Jacksonville and Indianapolis, they gave Christian Ponder plenty of time against the 49ers and the Lions and kept him off the floor to boot.

…of Adrian Peterson from knee surgery has been discussed ad naseum but there’s a reason for that: It truly is remarkable. Not necessarily that he’s come back. Not even necessarily that he came back in time to play in the first game of the season.

What’s truly remarkable is that Peterson looks close to 100% four games into the season.

Anyone I’ve ever known coming back from an ACL tear has taken a loooooonnnng time to return to their previous form. Some never do.

It’s all about confidence, or lack thereof. Athletes returning from ACL surgery tend to be timid because the original injury freaked them out so much. They don’t believe they will not crumble again if they cut too sharply on the injured leg.

Returning from these injuries is as much a mental recovery as it is physical one.

The remarkable thing about Adrian Peterson’s comeback is the mental fortitude it takes to run with the abandon he displayed on Sunday.

That’s the number of yards Jerome Simpson generated in his debut as a Viking. Simpson lead the Vikings with four receptions for 50 yards but perhaps more importantly, he added 57 more yards from two pass interference penalties incurred when Ponder threw deep to him against one-on-one coverage.

Simpson’s most impressive catch of the afternoon came when he went up and over a defender to take the ball away late in the game to convert a third down and extend a clock-killing drive. That’s a reception we’ve seen both Michael Jenkins and Devin Aromashodu attempt, but fail, to execute.

Simpson can thank Percy Harvin for the one-on-one coverage. The Lions had Harvin bracketed all day long, limiting him to three catches for 22 yards.

Percy had them beat before the Lions’ defense ever had a chance to implement their little scheme to stymie our superstar receiver.

Calvin Johnson? Puhleeeeeze. Johnson had five receptions for 54 yards and he coughed up a touchdown.

Mere mortal receivers can be shut down but what receiver can rip off 15 yards rushing between the tackles and is a threat to take a kick to the house?

There’s only one and he wears number 12 for the Minnesota Vikings.

Christian Ponder followed-up a game where he took his game up to the level of his competition with a hell of a performance against a legit playoff-caliber team with a proficient display of game management.

It wasn’t an eye-popping performance because it didn’t have to be.

All the Vikings needed out of Ponder on Sunday was to ride Adrian Peterson’s performance, take a couple of shots downfield to see what we’ve got in Jerome Simpson, to convert some third downs, eat the clock, and not turn the ball over.

Leave that up to the Lions.