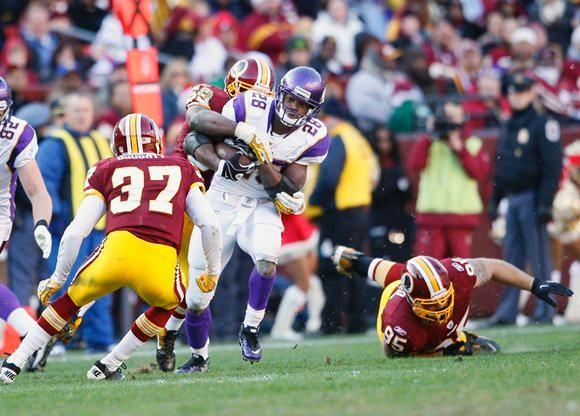 It should be fun to take this thing out for a ride and see how she handles on real grass in the open air.

The Vikings visit Washington on Sunday with a 4-1 record but they should be undefeated.  No one predicted they’d get off to such a strong start but conversely, there was precious little evidence the Vikes would be challenged to match their three victories of last year, as many were saying.

If the Vikings maintain the laser-focus they were shocked into after taking the Colts for granted, they should board the return flight home sporting a beautiful new 5-1 record.

Robert Griffin III has had the media spotlight trained on him since his senior year in college with soaring expectations for his potential as a pro.

His quarterback rating of 101.0 ranks fifth in the league. He has completed 69.1% of his passes and thrown four touchdowns to one interception. He’s run for another four touchdowns, which leads all quarterbacks and he also leads the leagues in rushing attempts (42) by a quarterback and yards gained (241), averaging 5.7 yards a carry.

Though he’s only been sacked 11 times, RG3 has lost 76 yards on those sacks. That compares to the 28 yards the Vikings have lost on 9 sacks of Ponder. That illustrates just how much Griffin scrambles in the backfield and though he’s elusive, when you sack him, it will likely be for a large loss.

Griffin has fumbled the ball five times but only lost one of them.

Griffin is accurate, has a rocket for an arm, and can extend plays with his scrambling. His blazing speed (he ran a 4.38 forty at the combine) is disguised by his long stride; he simply doesn’t appear to run as fast as he does.

Washington runs a lot of option plays from the shotgun formation where RG3 will hand the ball off to bruising running back Alfred Morris…or keep it himself to run or pass.

Morris is a tough, pounding back who gives the Skins an effective ground game, so the formation works well for them.

Right tackle Tyler Polumbus is not all that, and he will be overmatched against Brian Robison, who is a superb run-stopper, so look to Washington to run to the left and center of the line.

The Vikings will need to continue to play the disciplined defense they have been playing.

The front seven has been very good at shutting down opponents’ running game thus far and they’ll have to do so again Sunday against the Morris/Griffin combo.

The Vikes will have their chances of putting a hit on Griffin, given how often he carries he ball and coming off a concussion as he is (he shouldn’t be playing, frankly–shame on Mike Shanahan and shame on the league for allowing it), we have an opportunity to make him skittish about running.

The Vikings will need a plan to stop the quarterback draw, which is Griffin’s most effective running play (he scored twice on the play against the Titans and once against St. Louis). But when Griffin runs in the open field, he does not carry the ball high and tight, so Vikings defenders should look to strip the ball from him when the opportunity arises.

The defensive backs must remain diligent in their coverage because of RG3’s ability to extend plays with this scrambling. Though Washington rarely throws deep, with Griffin’s rocket arm, if Smith or Jamarca Sanford let a receiver get behind them, it could mean a score.

Like most rookie quarterbacks, when things breakdown in the pocket, he has a tendency to tuck it and run but for RG3, his confidence in his speed may be a liability because he’s run before on third and long (which is always a bad decision for a quarterback) and failed to convert.

Finally, if the Vikings can put pressure on Griffin and chase him down in the backfield, he tends to throw dangerous passes that are ripe for picking off. That, too, might be a consequence of the confidence he has in his arm strength.

There will be some familiar faces lining up against the Vikings on Sunday and I couldn’t be more delighted to see them.

Cornerback Cedric Griffin (he wears number 39) has found himself a backup role with Washington and Madieu Williams (41) starts at safety. And they appear to be playing just as they were playing when we last saw them.

It will be interesting to see if Bill Musgrave picks on either of those players.

The Skins play a 3-4 defense with a lot of man-to-man coverage but with the exception of the All-World football player Percy Harvin, Vikings receivers haven’t proven exceptional in gaining separation.

But if Jerome Simpson is able to play, I wouldn’t be surprised if Christian Ponder tries to find him on the perimeter and for Musgrave to get the ball to Harvin down the middle of the field in space where he can make Williams miss, because we Vikings fans know all too painfully that Madieu takes the worst angles in the history of the NFL.

Last year, the Vikings gained 241 yards on 38 carries against the Skins. Adrian Peterson gained 38 yards on 12 rushes and scored once before Washington safety DeJon Gomes‘ hit on Peterson’s knee ended his season. Toby Gerhart had his first carry with 10:33 left in the third quarter and ripped off a 67 yard gain on his way to 109 yards on 11 carries.

We should be able to run on these guys and if the Vikes’ offensive line can continue their stellar play of late that has afforded Ponder hours in the pocket and opened gaping holes for our backs, we should be able to execute those long, time-consuming drives that will keep RG3 off the field.

I think this will be a close game and that will probably come down to a Blair Walsh field goal.

Question Of The Week: When will John Carlson catch a pass for more than 1 yard?

During the 1987 strike season, the Vikings overcame the poor start by the scab players to advance to the NFC Championship game against the Washington Redskins. The game came down to the wire with only a dropped last-second touchdown by Vikings running back Darrin Nelson keeping the Vikes from forcing overtime and earning a chance to advance to the Super Bowl.

Darrin Nelson has forever been blamed for that lost chance ever since, even by yours truly. But in 2007, pre-Minnesota Vikings Chat, I saw some game footage that changed my mind.

This is my apology to Nelson: [READ]

Fran Tarkenton should be prohibited from using exclamation points!

The Hall of Fame quarterback writes columns about the Vikings for the Pioneer Press! But he uses way too many exclamation points!

But I have no control over that! I am not his editor!

So I am formally asking the Pioneer Press to put an editor on that shit!!!