Yes, we know: Matt Cassel is our starting quarterback and that’s great. But before we embark on the 2014 regular season, there are plenty of reasons we can draw from the preseason performance of Teddy Bridgewater to be excited about the future. In no particular order, let us count the ways: 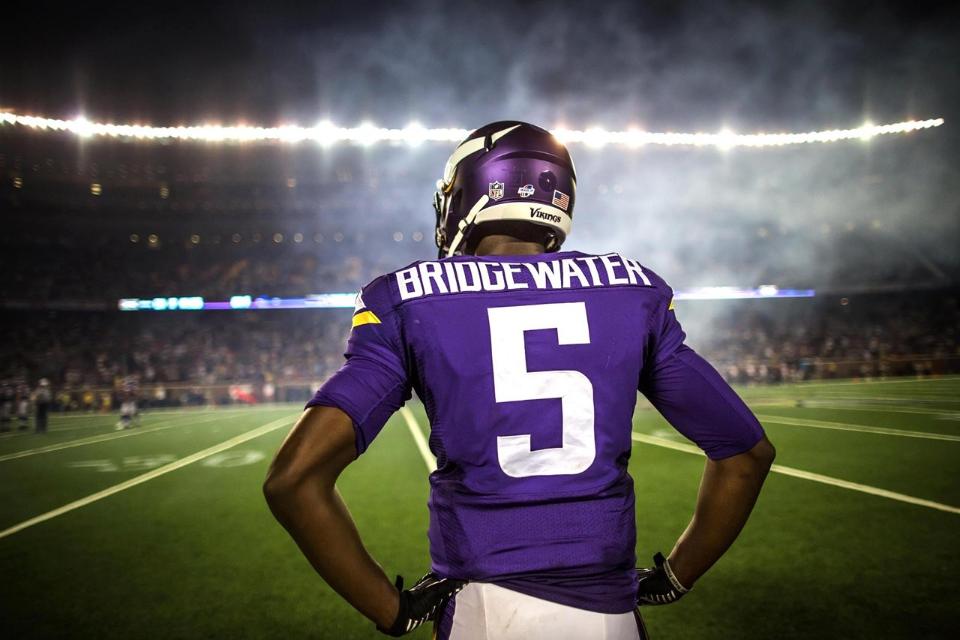 1) He Keeps His Eyes Down The Field When Under Pressure

After eluding pressure up the middle against Arizona, Bridgewater kept the play alive by finding Allen Reisner on a crossing route and got the ball to him on a nice touch throw.

2) Can Read A Defense & Look Off Defenders

Time and again–and this was evident from his college highlight reels–Bridgewater showed he’s adept at looking off defenders. It’s also clear he’s comfortable with his pre-snap reads.

Several times this preseason, Teddy threw the ball away rather than risk an interception by trying to force the ball to a covered receiver. 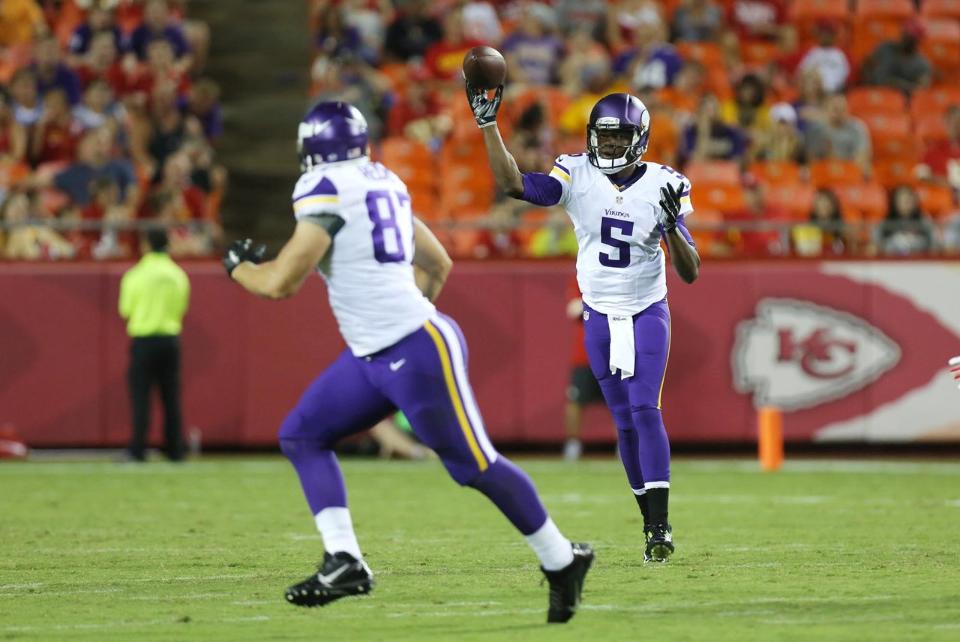 5) He Can Scramble To Elude A Rush

Several times during the preseason, Bridgewater pirouetted out of defenders’ grasp just as they were closing in to either find an open receiver, toss the ball out of bounds, or tuck it and gain some yards.

6) He Doesn’t Get Flustered With Defenders At His Feet

Bridgewater has shown poise as the pocket collapses around him, making several throws with a defender in his grill. He doesn’t get happy feet nor tuck it and run too early. 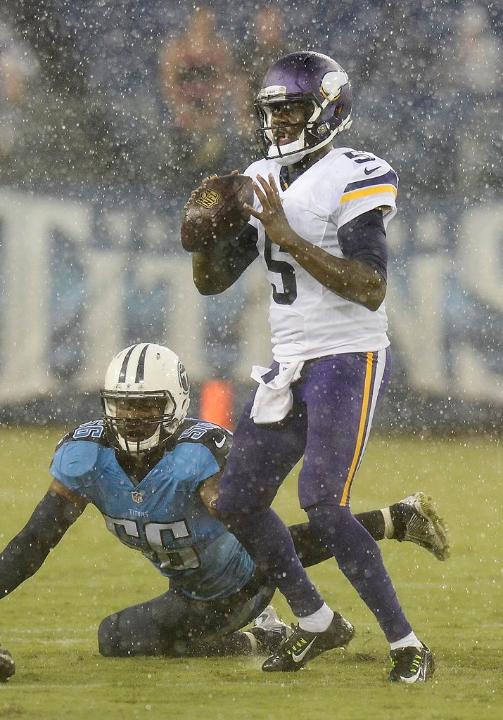 7) He Knows How To Slide To Avoid Injury

8) Can Throw The Long Ball

Bridgewater threw a long, perfectly placed ball down the left sideline that should have resulted in a touchdown but Adam Theilen couldn’t haul it in.

Teddy Bridgewater looked every bit the rookie quarterback playing in his first NFL game against the Raiders this preseason. He went  6 for 13 for 49 yards, two sacks and one fumble that the Vikings recovered. Bridgewater closed the preseason with a passer rating of 117.1. 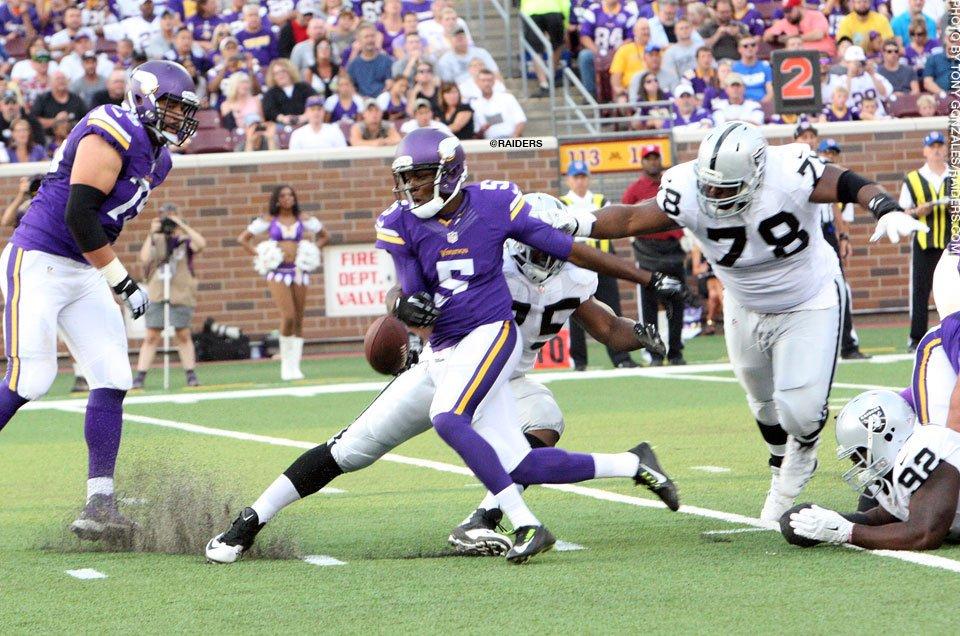 10) Can Rally His Team From Behind To Earn A Victory

Teddy bounced back from a pedestrian performance against the Raiders to rally his team from behind in the final minute to beat Arizona…dramatically:

11) Can Successfully Execute The One-Minute Drill

With 1:11 left to play, after the Arizona Cardinals took the lead on a controversial call, Bridgewater led the Vikings down the field by completing six of seven passes for 77 yards, capping it off with a back-shoulder fade pass to Rodney Smith for the win.

12) Can Make Defenses Pay For Blitzing

On the final drive against Arizona, the Cardinals sent a bunch of blitzes after Bridgewater but he was able to find an open receiver to make them pay.

13) Can Use His Cadence To Draw Defenders Offsides

Bridgewater did this in the preseason and I don’t recall ever seeing Christian Ponder do the same. 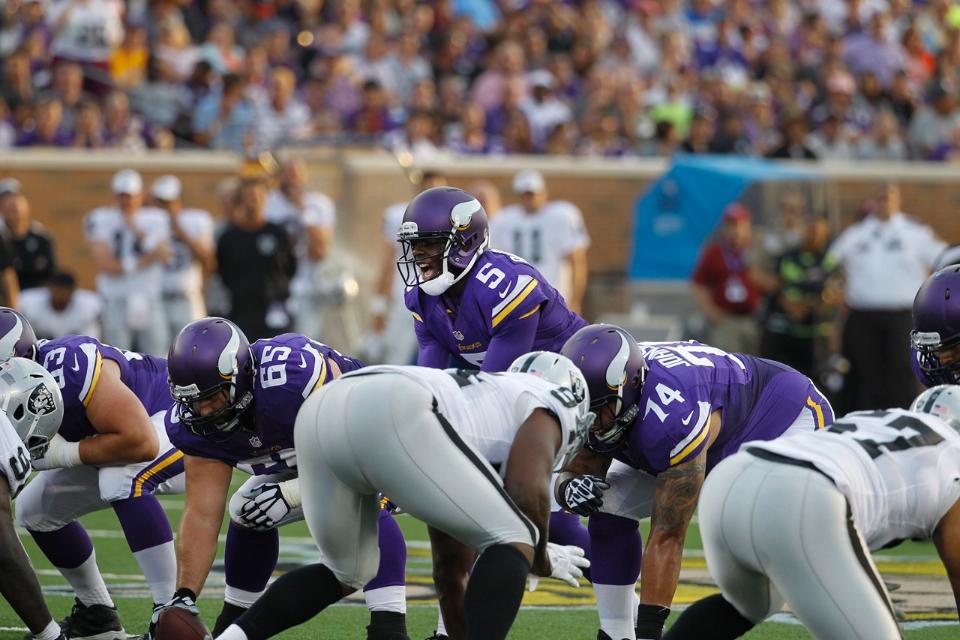 14) Learns & Applies Within A Game

Against the Cardinals, Teddy Bridgewater threw a front-shoulder fade pass to Jerome Simpson which was easily defended and as a result the ball fell incomplete. Later in that same game, during the final drive, Bridgewater did not make the same mistake twice. This time he threw to Rodney Smith’s back shoulder, away from the defender, for a touchdown.

Similarly, against the Raiders, Bridgewater held the ball in one hand away from his body while trying to elude a rush which resulted in the ball being stripped from his grasp. Against the Cardinals in a similar situation, he protected the ball with both hands while in a crowd of defenders.

16) He Steps Up In The Pocket To Avoid The Rush

…and he doesn’t step into the backs of his offensive line, like one Christian Ponder always did.

17) Can Throw With Touch

…like on this fade to Adam Theilen against the Titans. This entire clip, in fact, illustrates many of Bridgewater’s positive qualities: 1) Scrambling, 2) running ability, 3) sliding ability, 4) accuracy on the run, 5) throwing the ball away, 6) stepping up in the pocket, 7) pocket awareness, and 8) touch.

Are you excited about Teddy Bridgewater? If so, why? If not, why not?