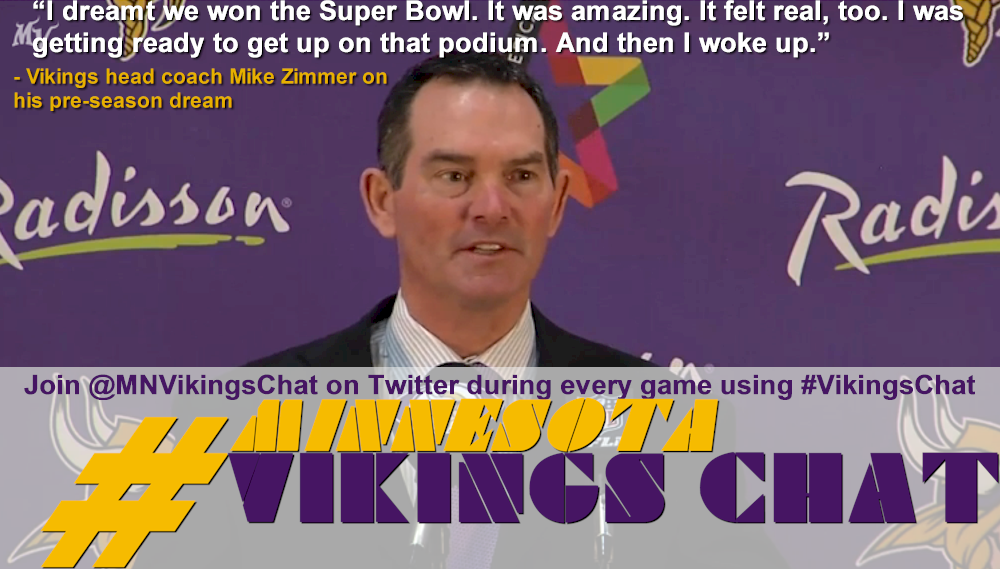 “I had a heck of a dream last night,” Zimmer said this afternoon. “I dreamt we won the Super Bowl. It was amazing. It felt real, too. I was getting ready to get up on that podium. And then I woke up.” – Zimmer literally dreams about winning Super Bowl

While coaching a secondary led by Woodson and Hall of Fame cornerback Deion Sanders, Zimmer worked in lockstep with defensive coordinator Dave Campo. Woodson said Zimmer often installed the game plans, and together Zimmer and Campo kept the Cowboys a top-10 unit for the rest of the decade.

“We didn’t have a lot of talent,” Woodson said. “In ’95 and ’96, man, our drafts were terrible. But he put in some wrinkles that made it hard for opponents to exploit our weakness.” – Vikings’ Zimmer set in his ways as a football coach

Asked if he’d like to “call his shot” again Sunday at St. Louis, Peterson thought for a second and then took the bait.

“Yeah, I might as well speak it,” he said. “Yeah, touchdown. First run.” – Vikings’ Peterson is itchin’ for hittin’ 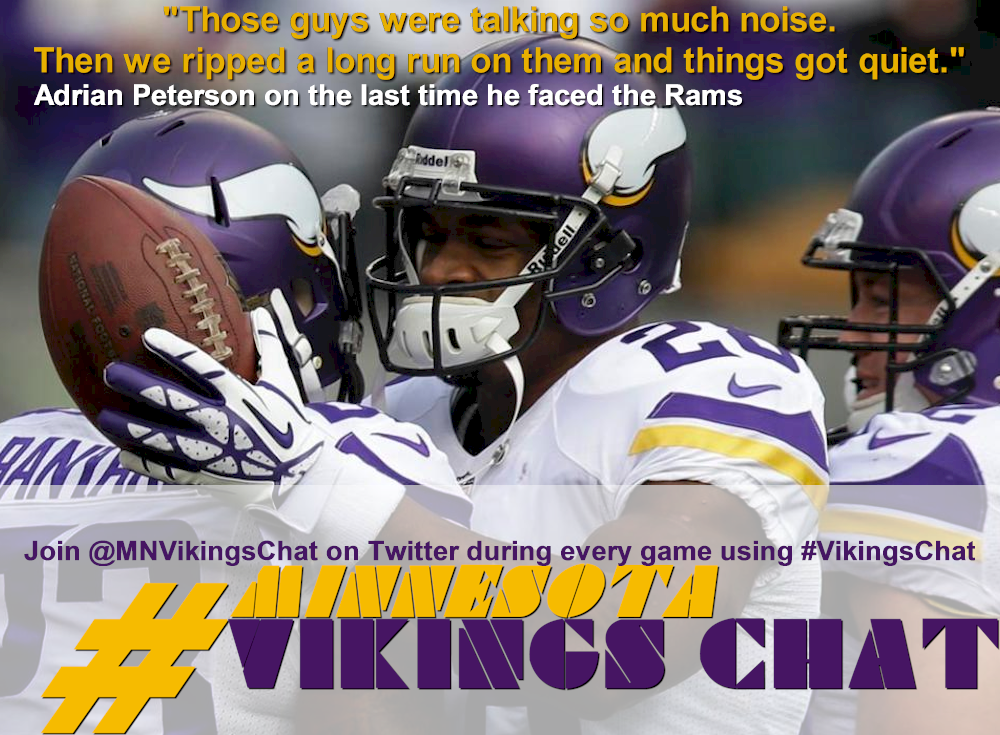 “Normally, I’m an assassin out there,” Peterson said. “I was a talking assassin that time. Those guys were talking so much noise. Then we ripped a long run on them and things got quiet. Hopefully, things play out the same way [Sunday].” – Vikings’ Peterson is itchin’ for hittin’

Anthony Barr On Transition From 3-4 Defense To 4.3

“I’ve never played behind the ball before,” he said. “Anytime I am behind the ball, definitely getting my eyes clued in (on) the running backs and fullbacks, stuff like that, and the pass coverage, trying to understand the concepts that they’re running. It’s been a challenge both ways.” – Zulgad: Ready or not, Barr will be expected to play key role

“I just have to get my hands on him, he’s a very quick center,” Joseph said. “Can’t really say what we’re going to do, you’ll see Sunday. But our line, as a whole, just has to get after him.” – Joseph’s return comes against familiar foe in Scott Wells

Vikings wide receiver Cordarrelle Patterson said he’s constantly thinking about his first kickoff return opportunity in the season opener against the Rams on Sunday. He even pleaded to Rams head coach Jeff Fisher in the offseason when the two bumped into each other at the ESPYs in June.

“I told him, ‘Just make sure he kicks me the ball,’” Patterson said. “He told me, ‘Be ready.’ So I’m ready for that.” – Patterson to Rams coach Fisher: ‘Kick me the ball’