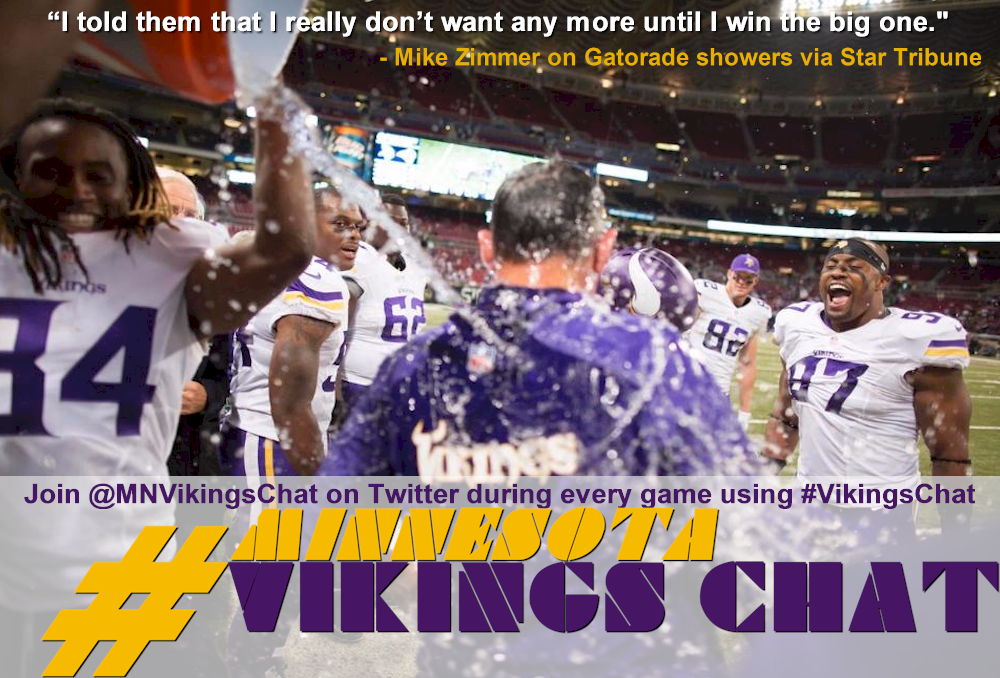 “I told them that I really don’t want any more until I win the big one,” Zimmer, still soaked, said after the game [from a Gatorade show]. – Vikings Smash Rams In Zimmer’s Coaching Debut.

“Felt good about the game, felt good about game plan, felt good about players and how we practiced this week. Had to get a little Pepto-Bismol from Shug, but that’s every week. Not unusual. I was probably more nervous for first preseason game. I was nervous, don’t get me wrong.” – Mike Zimmer during his post-game press conference.

“I’m sure it means something to him because I think every man in that room was excited for Coach Zimmer. This was his first win as a head coach. He’s a guy that’s been around this league for 20-some-odd years and he works hard. He’s been a great coach and I think that to get his first win, we were all excited for him.” – Matt Cassel during his post-game press conference.

“We came in with a great game plan. We came in prepared. He makes sure we’re in the best call possible on every play.’’ – Everson Griffen on Mike Zimmer‘s defensive game plan. – Jim Souhan: Zimmer’s first game is well-planned.

Vikings Winning On The Road

“I’ve said it all along: If you play smart football, if you play good techniques and good fundamentals, you can go out in the parking lot and do good. It’s more about how you play than where you play.” – Mike Zimmer on winning on the road, which the Vikings failed to do in 2013, Vikings take Zimmer’s advice to win on road.

“I thought our offensive line played well against a good defensive front. We had a few snap problems, but other than that, I thought we protected well.” – Mike Zimmer at post-game press conference.

“They were one of the league leaders in sacks last year and I think we gave up one sack all day. That’s a testament to those guys. I think they work well together. They work hard throughout the week. I was really excited that they played the way that they did and they were able to manage that rush.” Matt Cassel on offensive line vs Rams, Offensive Line Does Its Job.

“We knew we were going up against a good defense, especially a good front line. Our guys up front didn’t back down and we continued to hit them in the mouth. We were able to be effective in the run game and be balanced as an offense.” Adrian Peterson on offensive line vs Rams, Offensive Line Does Its Job. 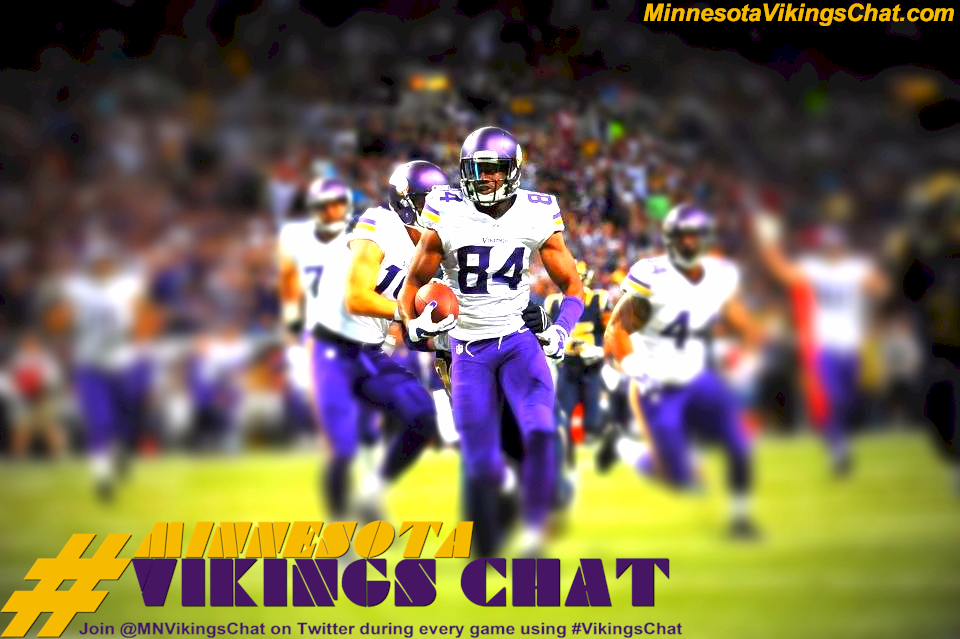 “As soon as he got that pitch, I saw a great block by [running back Matt] Asiata and I threw my hands up because I knew he had the ability to take it the distance,” running back Adrian Peterson said. – Vikings Smash Rams In Zimmer’s Coaching Debut.

“I just want the ball in my hands. When I get the ball, I expect great things.” Cordarrelle Patterson on his own performance, Patterson shines in Vikings new offense.

“Yeah, definitely, I’ve heard they don’t like me much. As a player, you don’t worry about it. Like Zim said, you know Pro Football Focus don’t call the plays, so they don’t know what defenses we’re in, what schemes we’re running and when you’re supposed to give up the catch and stuff like that.”

“I was consistent, which was different for me. And more confident. Definitely. But that’s one thing this coaching staff has put into us. They put a lot of confidence into me and it’s helped me get back on my game. I know what I’m supposed to do and how to get the job done.” – Josh Robinson makes key play in Vikings victory.